The property market remains resilient as the stamp duty holiday draws to a close, but we expect price growth to soften towards the end of the year. The latest ONS data shows that house prices across Great Britain rose by 8.0% in the 12 months to July, down from a peak of 13.2% in June. By the final quarter of the year, we expect the rate of annual increase to be closer to 4.5%. There are two main reasons for this.

The experience of previous stamp duty holidays suggests that prices weaken when the concession is withdrawn. This is likely to be the case when the stamp duty holiday ends in September, but the decrease could be more modest than in the past. In September, the average home achieved 100.0% of its asking price, although activity was a little lower during the month.

In addition, there is the ‘base effect’. Towards the end of 2020, the market was recovering; the average price was 6.1% higher than in Q4 2019. A lack of stock should keep annual price growth in positive territory, but this will be against a relatively high base.

We forecast that the average price in Great Britain at the end of the year will be £258,000, 4.5% higher than in Q4 2020. While growth will slow as the year draws to a close, 2021 will remain a strong year for price appreciation, compared with the performance of recent years. 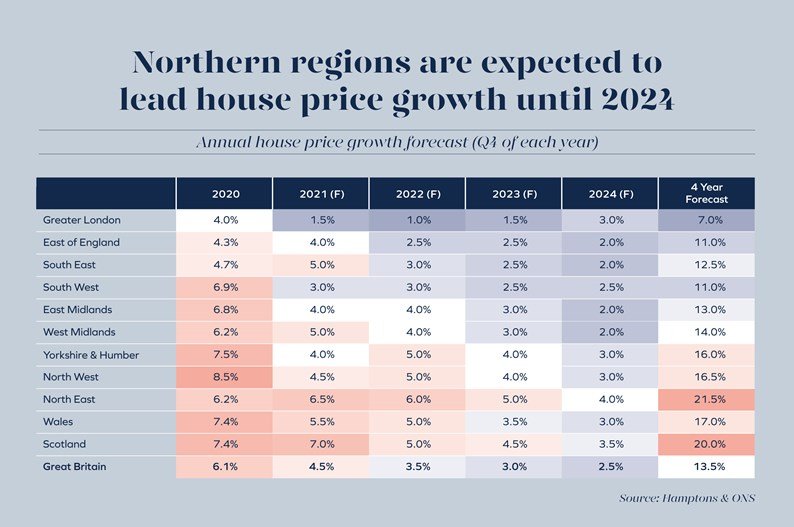 A second wave of lockdown-induced demand will keep price growth above pre-pandemic levels at 3.5% in 2022…

The desire for more space and relocation that has stemmed from changes in working patterns will continue to stimulate the market in 2022. Since the start of the pandemic, equity-rich homeowners have dominated property market activity. This is thanks to the heavily-discounted mortgage deals available to borrowers with larger deposits.

We expect mortgage rates for all borrowers to hit rock bottom in 2022. This will boost affordability, particularly for first-time buyers. As the economy continues its recovery, it should also improve the luck of those priced out of the market or facing job uncertainty this year.

When the stamp duty holiday ends in September 2021, first-time buyers should be able to make the most of their concession. Since they will be acquiring lower-priced properties, the average house price in the leading surveys will drop a little.

Strong house price growth in 2020 and 2021 has also intensified affordability constraints and increased the deposit requirements, particularly for buyers in London and the South. Therefore, we expect price growth in 2022 to be softer than in 2021.

The economic recovery will determine the medium-term outlook for the housing market, with income growth and the pace of interest rates rises being particularly crucial to the direction of house prices. Price growth will be constrained by the forecast 3% rise in incomes in 2023.

Interest rates are set to rise in late 2022 or early 2023, but any increase will be gradual, aiding affordability. The Bank of England expects the base rate to return to 0.5% in 2024, still below its pre-pandemic era level.

If interest rates increase more rapidly than expected this would dent affordability and put a dampener on price growth. However, the combination of economic bounceback and the enhanced importance of homes should keep market activity above that of the pre-pandemic era.

The house price cycle is likely to end in 2024, as a new one begins…

Looking to the longer term, it is likely that 2024 will mark the end of the current house price cycle. Typically a cycle lasts around 16 years. The end of a cycle is normally characterised by a convergence of growth across the regions following a period of prices in the North playing catchup with those in the South. Signs often emerge, at the very end of the cycle, of a pick-up in activity and prices in London. However historically, the beginning of a new house price cycle has also been synonymous with a sharp price correction. So the question is, will this pattern repeat itself?

While we expect to see prices and activity in London rise again in 2024, we don’t think this will be followed by a period of house price falls. A low interest-rate environment, tighter lending criteria coupled with the fact we’ve seen considerably less house price growth over the last 16 years means we’re more likely to see a continuation of more modest house price growth, such as we’ve witnessed during the last five years, rather than boom and bust. 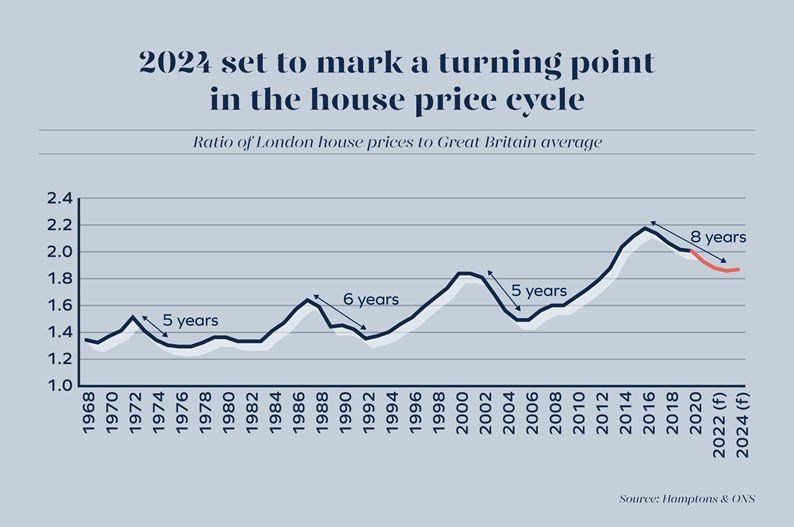 Annual house price growth in London slowed from 5.1% in June to 2.2% in July. The capital has been the weakest performing region and we expect this to continue until 2024, as a result of stretched affordability and the rise in flexible working which is encouraging households to leave the city.

In theory, the ending of the stamp duty holiday should deal the hardest blow to London. Until June 30, buyers were able to save as much as £15,000. Yet conditions have not significantly altered since that time. The average seller in London achieved 99.1% of their asking price in September, up from 97.3% in September 2019.

However, 2024 is likely to mark a turning point for London as a new cycle dawns. Prices in the city are set to rise by 3.0%, outpacing the national average for the first time in nearly a decade. But subsequent increases are unlikely to be as steep as those seen in previous cycles.

The pandemic has delayed Prime Central London’s recovery this year, and its impact will weigh on future growth…

The resumption of international travel is key to the market in Prime Central London (PCL), since 45% of buyers in 2019 were overseas nationals. As the global vaccine roll-out progresses, we expect more people to travel to PCL and return to work or live there, giving the market a modest boost.

But while transactions are set to rise next year, even though prices in PCL are still 11% below their Q2 2014 peak, we do not foresee a substantial rebound that would return prices to this level. The 2% overseas stamp duty surcharge and 3% second home surcharge will continue to limit growth. Instead, we think prices will rise 1.0% in 2022, 2.0% in 2023, before an acceleration to 4.0% in 2024.

Southern markets have been the biggest beneficiaries of London outmigration, but affordability will bite…

In our view, the popularity of flexible working – which enables people to live further from the office – will continue to fuel the locations bordering the capital.

However, house prices in these areas were already expensive before the pandemic, and strong growth in 2021 has exacerbated this. In the second quarter of 2021, prices rose by 8.6% in the East of England, by 8.5% in the South East and by 10.8% in the South West. Yet they have still been outpaced by regions in the North as is typical at this point in the cycle and there are signs that price growth is slowing.

Slow growth in incomes will limit price increases in the South. Over the next four years, we expect prices to rise by 11.0% – 12.5%. As the biggest beneficiary of London outmigration, the South East is set to see the strongest price growth.

House prices in the Midlands have already returned to their level at the start of the cycle. In 2008, the average price in the East Midlands was 17% below the national average. Today that gap remains the same and we expect no change until the end of the forecast period in 2024.

Over that time, house prices in the East and West Midlands are likely to rise in line with the national average. Despite double-digit growth in 2021, we expect the pace to moderate to 4.0% in 2022 and 3.0% in 2023.

There has been double-digit growth in the first and second quarters of this year in Northern regions. However, the average price in the North East has only recovered to its pre-financial crash peak this year.

We forecast that prices in the North East will rise by 21.5% over the next four years, making it the top-performing region. But by 2024, the average price in the region will still be 41% below the national average, unless economic growth in the regions picks up pace.

Prices in the North West and Yorkshire & Humber are set to be around 16% higher by 2024, as affordability in these regions is easier than in the South.

In July, more than 40% of homes that sold in Scotland and Wales had received three or more offers. In the second quarter price growth in Wales was 15.5% and 10.0% in Scotland, in each case the fastest pace of growth since 2007.

The gap between Wales and the other regions has narrowed. Scotland still has some catching up to do however, which is why we forecast the region will be the second strongest performer over the next four years. By 2024, the average price in Scotland is set to be 20.0% higher than today. 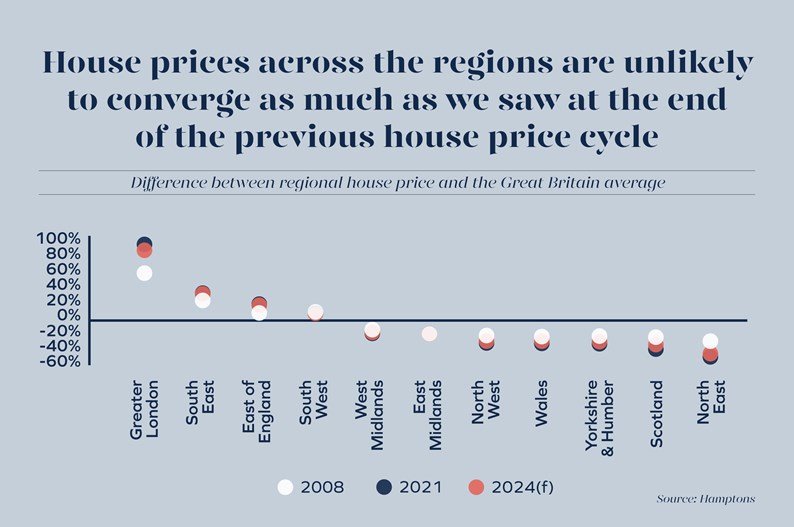 A record-breaking first half of the year means that more homes will have sold in 2021 than in any year since 2007. We expect an increase in completions in September, as the stamp duty holiday comes to an end, but it’s unlikely to rival the spike in June. Activity seems set to moderate as the year draws to a close. However, transaction levels are unlikely to decrease dramatically, as was the case in the aftermath of previous stamp duty holidays.

2022 will be a strong year, with 1.25m completions forecast across Great Britain…

In 2022, activity will be supported by households who have been unable to move home in 2021 as a result of affordability pressures, job uncertainty – or because they could not find a suitable property. First-time buyer numbers should increase in 2022, as the rates on higher-loan-to-value mortgage deals become cheaper.

We forecast that, thanks to a growing economy and low interest rates, transactions will reach 1.3 million in 2023 and 2024. Transactions will remain above pre-pandemic levels due to people placing more importance on their homes. 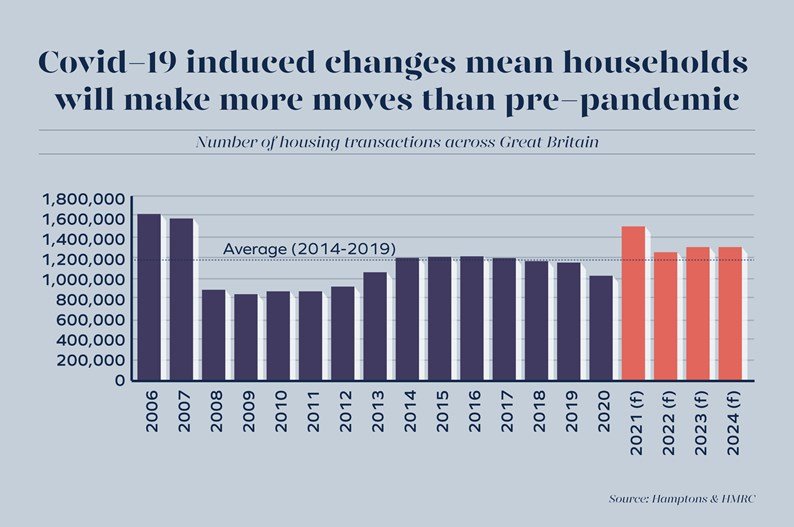