Following two decades of unparalleled growth, the number of private rented households in England peaked in 2016, and the size of the sector has remained broadly stable ever since. This is because, despite affordability barriers, thousands more 25-34 year olds have climbed onto the housing ladder than at any time in the last decade. While first-time buyers were enjoying cuts to their stamp duty bills, investors faced a 3% surcharge alongside other tax hikes. But is the direction of travel likely to change again We argue it is unlikely.

Size of the sector

During the 2008 recession, homeownership rates tumbled as first-time buyers and those with smaller deposits were unable to access finance, increasing the numbers living in the private rented sector, while many forced sellers also ended up renting. However, despite the impact of Coronavirus, we believe things will be different this time and that the private rented sector will be slightly smaller in five years than it is today.

This has been no ordinary recession. Lenders have reintroduced higher loan-to-value mortgage products much faster than after the 2008 downturn and a mortgage repayment ‘holiday’ has stopped arrears and repossessions. Both will support owner-occupation levels, especially among those with smaller deposits.

At the same time, Coronavirus has shrunk the population of large cities across the world. Typically, those that have left have been the most mobile, living in neighbourhoods where most people rent. Some have left to buy, while others have returned overseas. While it is too early to say whether the pandemic will permanently slow or even reverse the growth of cities, if it does, it has the potential to act as a drag on the private rented sector.

But it is not all one-way traffic. Low interest rates will continue to mean that buy-to-let returns will outstrip cash sitting in a savings account, supporting investment in the sector from smaller landlords in particular. The growth of build-to-rent is also likely to continue, putting a floor under any falls in the number of renters, while the end of Help-to-Buy in 2023 may reduce the number of first-time buyers and force developers to re-engage more readily with investors.

With smaller investors who own up to a handful of properties accounting for more than 95% of all landlords, the growth of the sector will predominantly be determined by the attractiveness of their returns in relation to other options. Given the absence of any significant changes in government policy, there is little to suggest buy-to-let will become significantly more or less attractive, supporting the view that its size will remain broadly static. We believe there will be 4.3 million privately rented homes in England by 2025, down from a peak of 4.7 million in 2016. 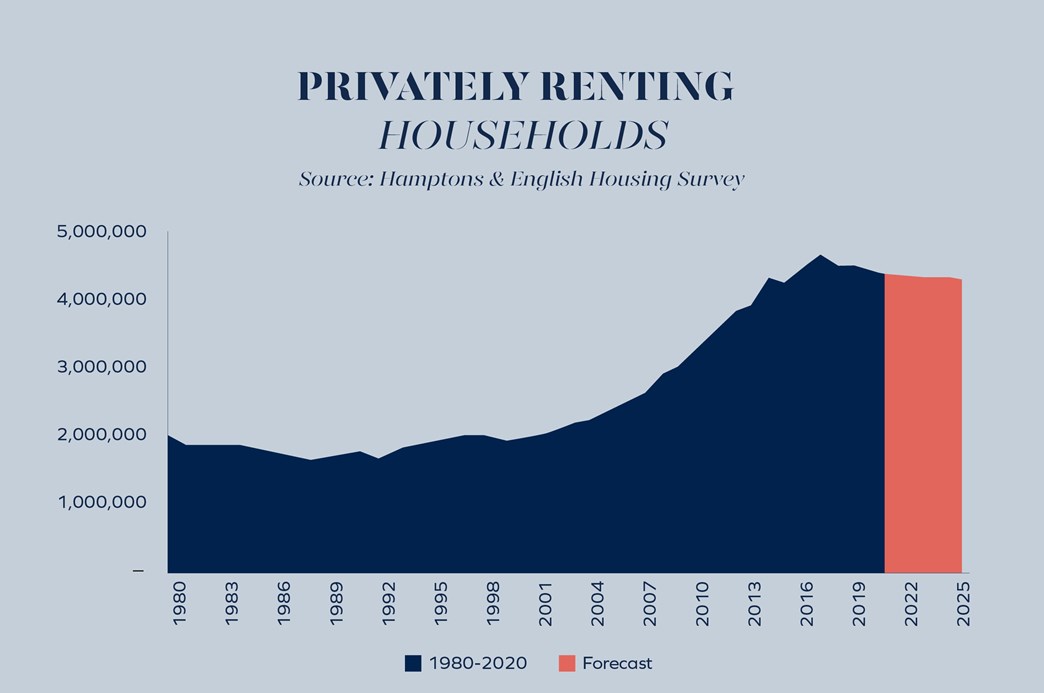 After an unprecedented year, rental growth bounced back in 2021. But Coronavirus has also put tenant incomes under pressure, and this is unlikely to recede until late this year at the earliest, keeping a cap on rental growth. After that, growth will depend on how fast the economy can recover and whether it can make up lost ground. Five years ago, such pressures would have undoubtedly led to rents falling across the country, but the fall in investor purchases since 2016 has reduced rental stock. This supported rents during the early months of the pandemic and has driven up rental growth from late 2020 into 2021.

With the exception of London, rental stock levels across the country remain 10% to 15% below the same time last year. This lack of supply will put a floor under rents for the foreseeable future, despite considerable pressure on tenants’ incomes. For this reason, we believe rental growth over the next three years will remain concentrated across the Midlands and the North, where stock levels have dropped furthest.

In London, rental growth will remain lower due to higher stock levels. In the medium term and even post Coronavirus, affordability constraints and the potential longer-term effect of the pandemic on the appeal of large cities will curtail rental increases.

Rental markets, particularly those in the South of England within an hour or so of the capital, have seen significant demand from people leaving London. This has supported rental pricing across suburban and rural markets in particular, but growth will remain constrained in the longer term by similar affordability pressures to those in the capital.

So, what does all this mean for landlord returns? We are forecasting small increases in gross yields between 2020 and 2023. The North will see the biggest increases, with rental growth forecast to outstrip house price rises. For each 1.0% rents increase faster than house prices, yields broadly increase by 0.1%. However, tax changes will likely mean these increases will not be fully reflected in net yields and, as a result, in landlords’ pockets. 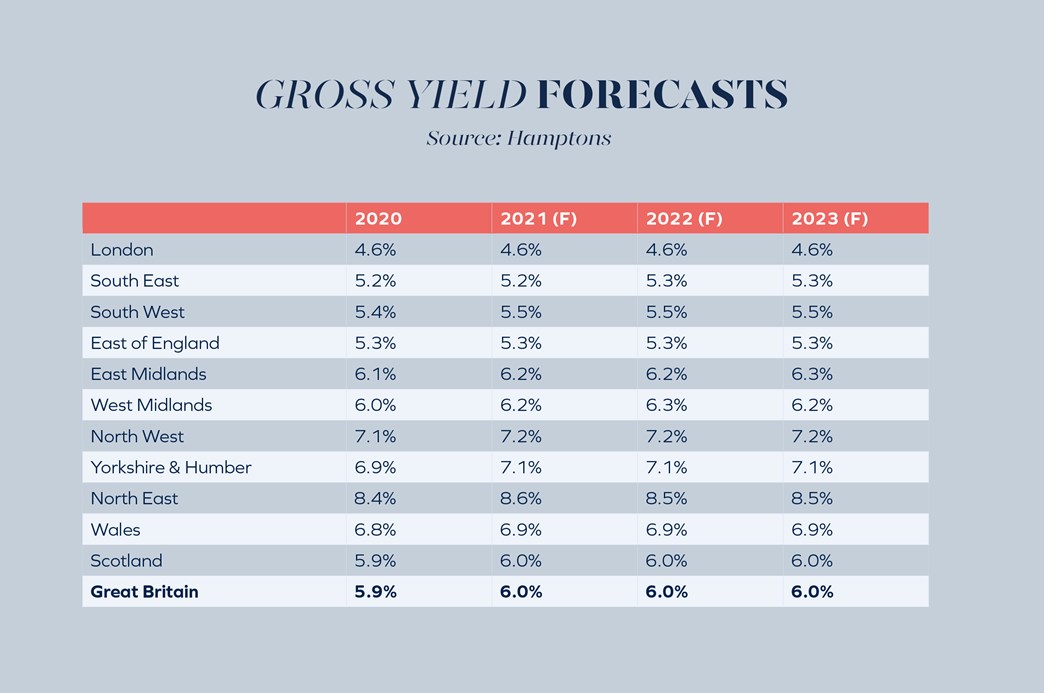