As the economy recovers transactions will rise gradually, surpassing the average of the last five-years by 2022 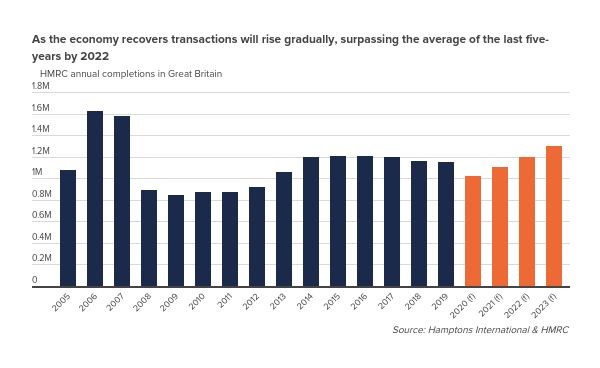 Sales completions ground to a halt during lockdown as buyers followed government advice to only move home if strictly necessary. The latest HMRC transaction figures show that completions in April were 57% down year-on-year.

When the housing market reopened in May, most movers who had agreed a sale before lockdown continued with their purchase. Nevertheless, there were 25% fewer transactions in the first six months of 2020 compared with the same period of 2019.

Activity recovered quickly when the market reopened, mainly thanks to pent-up demand and an increase in the number of people seeking more space. The stamp duty holiday has made some people decide to relocate now rather than in a couple of years’ time. It has also extended the summer selling season; there were more sales from July onwards than during the same period of 2019.

We expect the recovery to be sustained in the second half of the year, meaning that completions will hit just over one million in 2020. This is 11% fewer than in 2019, but more than in any year between 2008 and 2012.

This momentum should continue into Q1 2020, as the end of the stamp duty holiday approaches. But activity may weaken as job losses peak and the real economic impact of the pandemic begins to be felt. Despite this, we still expect there to be 1.1 million transactions in 2021, 8% more than in 2020, but still slightly below 2019 levels.

Transactions should rise gradually in 2022 and 2023, exceeding the average of the past five years, as the economy returns to health and Brexit uncertainties are removed. Additionally, if lenders reintroduce additional high loan-to-value mortgage products it is likely to support a larger pool of first-time buyers.

However, two factors will put a cap on transaction numbers: muted sentiment among buy-to-let investors and the ending of Help to Buy, the government scheme covering new-build homes. which lasts until 31st March 2021.