The downbeat mood in the lettings market in 2020 was in marked contrast to the excitement in sales. The average rent remained unchanged between the start of the first lockdown in March and September, but October marked a turning point when rents in Great Britain began to rise again. And by November the rate of growth had picked up.

But this average figure masks variations in the performance of the regions, with London lagging behind the rest due to a realm of factors unique to the capitals rental market.

Nationally rents rose 3.0% in November, twice the rate of increase recorded in October. Rents in both the South West and North led the way, rising by 8.1% and 6.5% year-on-year in October respectively, thanks to a shortage of properties. Renters’ incomes in these regions were supported by the furlough scheme and other Government stimulus schemes. Rural rents increased at a faster rate than those in cities, illustrating that tenants were keen to move to the country - like homebuyers.

Households moving out of town, seeking extra space for home working and gardens, helped produce the glut of homes that drove down rents in London in 2020. There was also a slump in demand for the apartments and houses that would normally be let on a short-term basis to overseas executives, tourists and international students. These groups stayed away as a result of travel bans.

Many of these short-let properties came onto the long-term market, exacerbating the excess supply issue. But rents in outer London have been more immune from these challenges. Rents in London’s suburbs rose by 3.8% in November, exceeding prepandemic levels. This meant that it was 21% more expensive to rent in inner London than in Outer London in October, compared to 44% more the previous year. We expect the slide in inner London rents to continue in early 2021 before levelling off.

At the end of summer 2020, we forecast that the average rent would fall by 1% during the year, given the pandemic chill that descended on much of the market following the initial lockdown. But this may turn out to be an underestimate. In fact, the rental market is showing signs of recovery, driven by households whose finances haven’t been affected by the economic crisis.

For 2021, we are forecasting an average decline of 1% in rents because, despite the arrival of the Covid-19 vaccines, we argue that the full impact of the virus on the economy will not be felt until 2021. We forecast that rents will drop by 3% in London. But the pace of decrease could slow, as the economy recovers and more people are vaccinated enabling them to travel again. 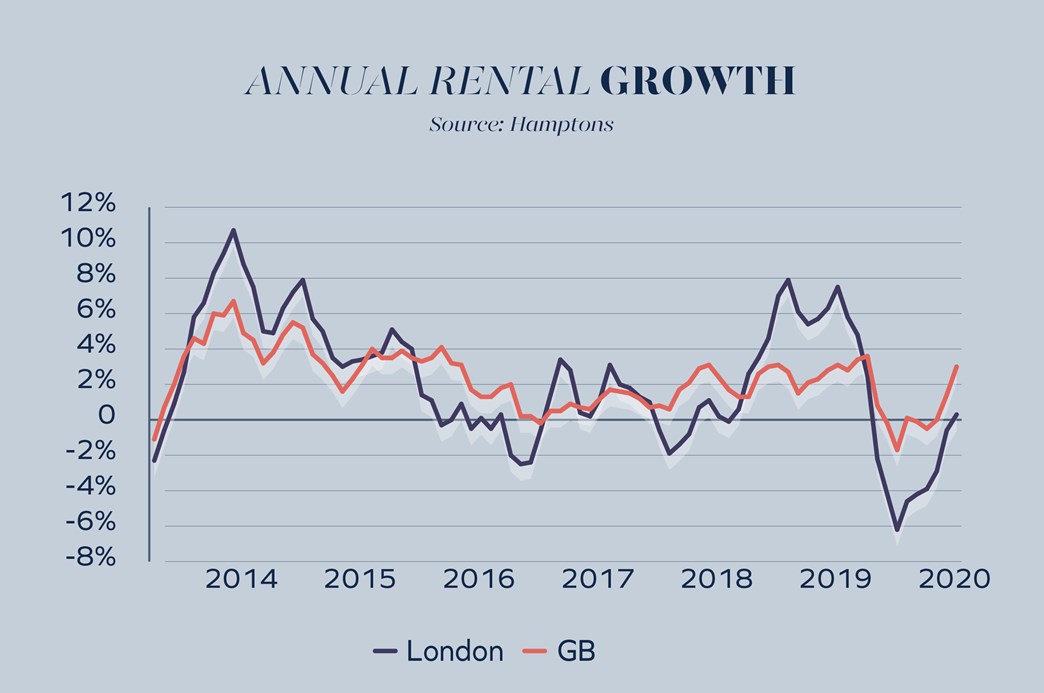 Of our Winter 2021 Market Insight