Since the start of the first government lockdown in March 2020, landlords and tenants have been subject to a similar set of forces as buyers and sellers. But it was the rental market that experienced the slower year.

Last year around 23% fewer rental homes were marketed than in 2019, with London the only region where more homes were available to rent. By comparison, data from HMRC show that just 7% fewer homes were sold in 2020 than in 2019. A lack of rental stock has undoubtedly both suppressed activity and supported rents – although the picture is far from uniform across the country.

With tenants more likely to be impacted by job losses than homeowners, the recovery in rental stock in the months following the easing of the first lockdown in May was firmly driven by the top end of the lettings market. In the most affluent areas, where average rents are around £1,500 per month, just 17% fewer rental homes were marketed last year than in 2019. However, in the least affluent locations, where rents average about £750 per month, there were 25% fewer rental homes marketed.

The maximum fall in rents across Great Britain was a decline of 1.7% year-on-year in May. However, in places where stock levels have come under pressure, outside London in particular, rental growth has recovered rapidly. Rents increased nationally in October for the first time since the onset of the pandemic, rising 1.4% that month before accelerating to 3.0% in November and 4.1% in December. In January 2021, rents rose 4.3%, the fastest rate of rental growth since July 2016 and this increasing pace of rental growth has continued into this year.

All nine regions in England saw rents rise at the start of 2021, with rental growth also turning positive in Wales. However, rents in the capital have been slower to recover from lockdown than anywhere else – they only started rising again in November. In January rental growth accelerated to 1.0%, predominantly driven by outer London due to the desire for extra space and a shift towards the greenery offered by more suburban locations.

In inner London, rents remain 11% below where they were before the pandemic started. A combination of fewer tourists and students – both domestic and overseas – as well as less business relocation and immigration has suppressed demand for short-term lets, meaning that the owners of these short lets moved them to the long-term rental market. By late autumn this had led to a doubling of rental homes being marketed in parts of inner London, putting downward pressure on rents. Outer London was not subject to the same pressures, however, meaning stock levels remained lower and by January 2021 rents were back above where they were in February 2020. 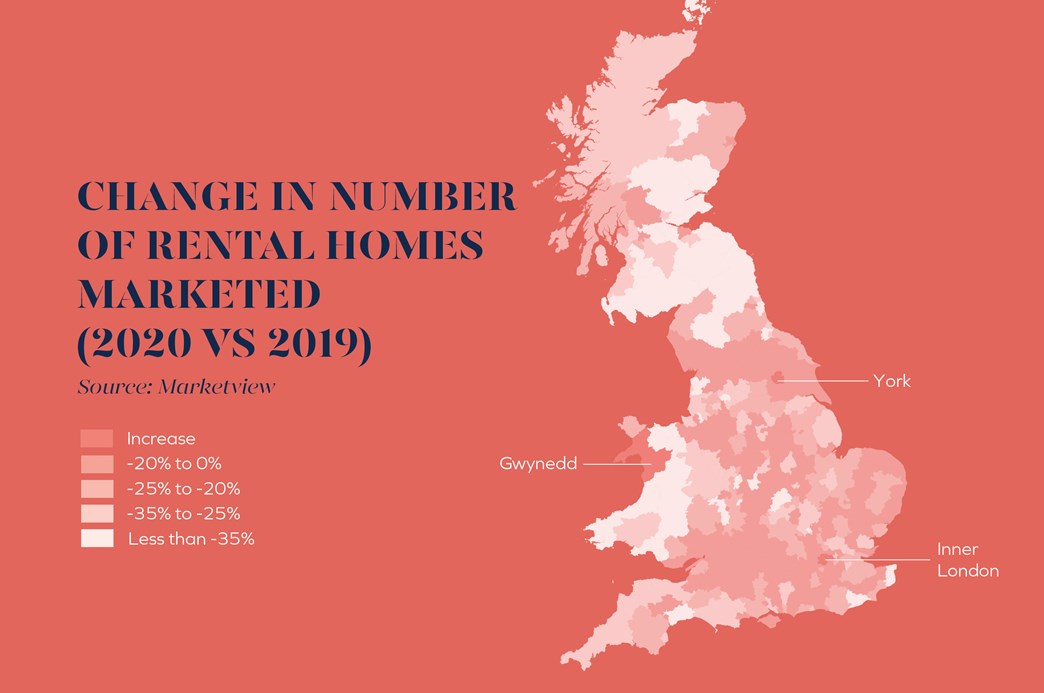 The lack of rental stock outside London has its roots in a couple of factors. It is at least in part driven by unprecedented government intervention in the lettings market. A moratorium on evictions since the start of the pandemic and a requirement for landlords to give six months’ notice to obtain possession of their property have meant that a relatively large number of rental homes have not been made available to new tenants. The fact investors have been buying comparatively fewer properties, with some choosing to sell up, has also reduced stock levels.

However, there are signs that the stamp duty holiday introduced in July has drawn new investors into the market and we have seen a pick-up in buy-to-let purchases. Under the terms of the tax break, investors are still liable for the additional 3% surcharge on their buy-to-let, but are able to benefit from the stamp duty exemption on the first £500,000 of their purchase. This means an investor buying a typical £250,000 house faces a stamp duty bill of £7,500 instead of £10,000.

In the final months of 2020, around 15% of homes were bought by an investor. Most of these purchases will complete before the end of March, when the stamp duty holiday is scheduled to end. While this 15% figure is double the 2020 average for the proportion of all properties purchased by investors, it is also significantly below the 28% figure recorded in February 2016, two months before the introduction of the second home stamp duty. With stamp duty rates heading back to normal in April 2021, it seems likely that relatively low stock levels will support rental growth for the foreseeable future.