Prime areas have fuelled the housing markets recovery since the pandemic began.  Wealthier households, in particular, have dominated activity across both sales and lettings as lockdowns caused people to reassess what they wanted from their homes, and where they wanted to be.  We believe that this attitudinal change towards property means we’re likely to see more activity in the housing market over the next few years, right across the wealth spectrum, than pre-pandemic.

Our forecasts set out what we think will happen in the wider housing market over the next few years, but what does this unabated new demand for relocation mean for prime markets?

While London has been the weakest performing region over the last year, there’s been a big split between the performance of the inner city compared to the more spacious suburbs.  The latest data from the ONS shows that house prices rose 6.0% in Outer London in July, while in Inner London, prices rose a modest 0.8% compared to the same month last year.

Prime Southern markets, having been the biggest beneficiaries of the pandemic induced race for space, have seen greater growth.  The rise of flexible working has meant that a record 19% of prime buyers in the South of England (South East, South West and East) came from London this year.  In turn, this has helped drive price growth of 2.9% in prime southern markets over the last year.  Even so, these already pricey areas have seen weaker growth than the rest of the country. 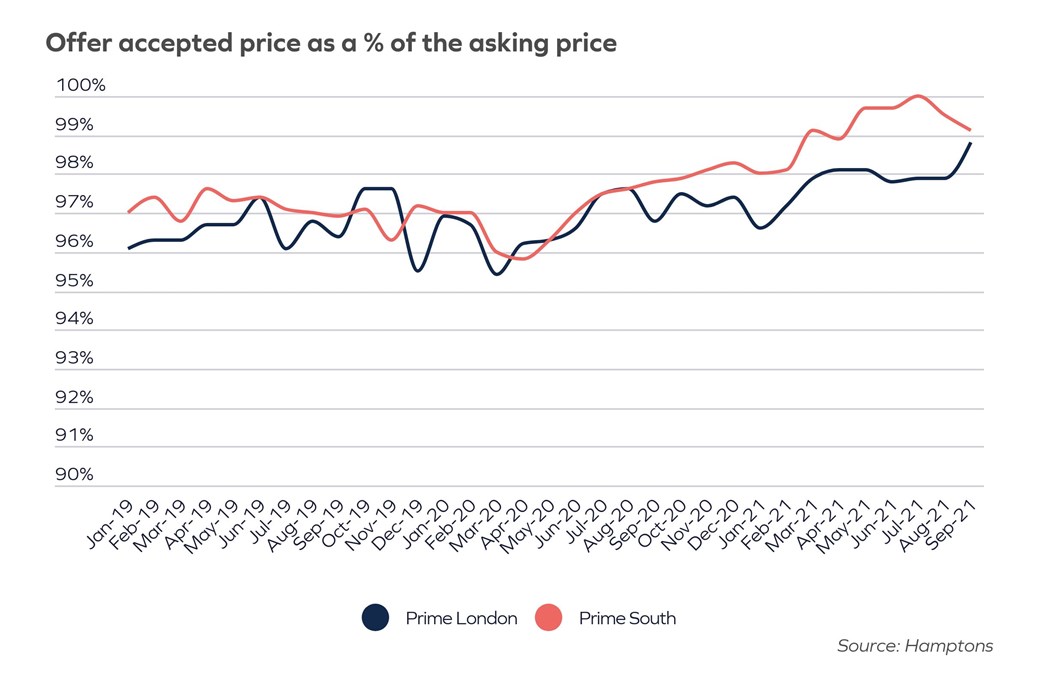 On paper, the end of the stamp duty holiday is set to hit prime buyers the hardest, but the market remains resilient. The attitudinal change towards property that we’ve witnessed over the last 18 months means people now place a higher value on their homes, having spent more time there.

Last month, sellers in prime areas of the capital achieved 98.8% of their asking price, the highest proportion since February 2016. Southern sellers are achieving even more of their asking price, averaging 99.1% in September. However, this does represent a slight softening from the record 100.0% achieved during the height of summer. But the real question, is what’s likely to happen next?

As the year draws to a close, we expect price growth to slow across Great Britain. The experience of previous stamp duty holidays suggests that prices weaken when the concession is withdrawn. This is likely to be the case when the stamp duty holiday ends in September, but the decrease could be more modest than in the past.

In addition, there’s the ‘base effect’. Towards the end of 2020, the market was recovering; the average price was 6.1% higher than in Q4 2019. A lack of stock should keep annual price growth in positive territory, but this will be against a relatively high base.

By the final quarter of the year, we expect the average house in Great Britain to cost 4.5% more than the same time last year. This slowdown in growth is forecast across all the regions. We expect prices in Prime Central London to end the year up 1.0%, with 2.0% growth anticipated in prime areas of the South. The most rural prime areas in the South, which tend to still be more affordable, are likely to see the strongest house price growth as buyers seek more space and the commuter belt stretches outwards.

This means that the gap between prime house prices in London and the South is likely to hit a ten-year low. By the end of the year, the average house in Prime London is likely to cost 56% more than one in a prime area of the South, down from a peak premium of 80% in 2014.

The space race will continue to benefit areas in the South next year as the second wave of lockdown-induced buyers seek a new home, but affordability will keep a lid on growth. Even though we expect the return of international buyers to boost activity in PCL next year, we don’t expect this to translate into much price growth. And so we’re forecasting prices in Prime Central London to rise by 1.0%, fractionally less than 1.5% in the South. As a result, the London premium will fall to its trough of 55% by the end of 2022, around the same level as 2012.

Signs often emerge, during the last few years of the cycle, of a pick-up in activity and prices in London – usually led by Prime Central London. This is why, after seven years of catching up, we think 2022 will mark the final year where prime Southern markets outperform their London counterparts. 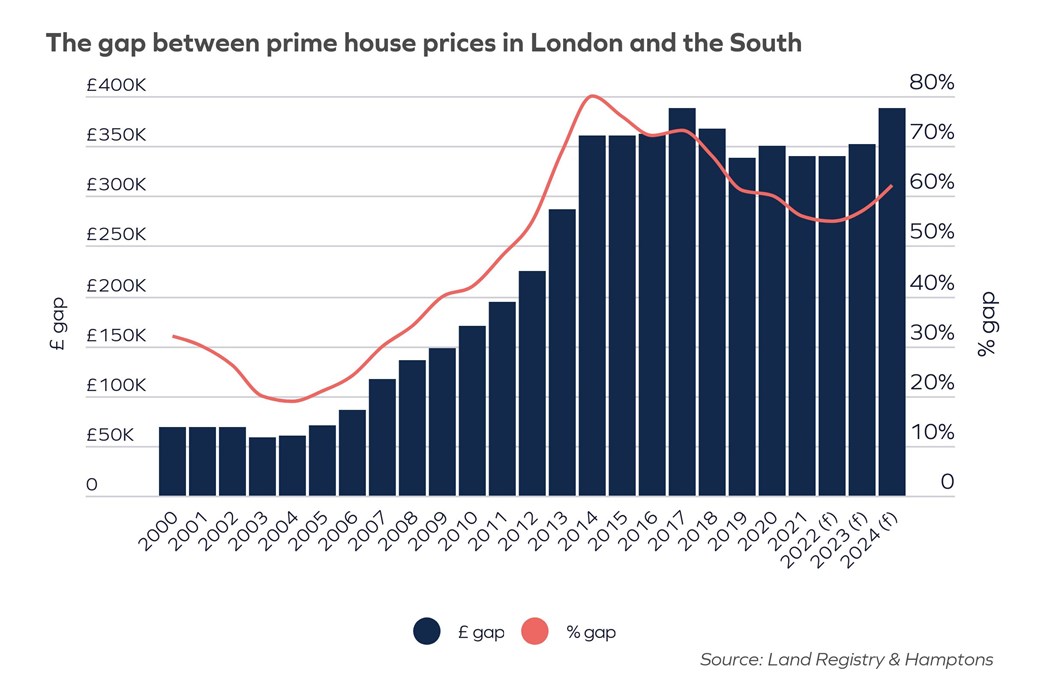 Looking to the longer term, it’s likely that 2024 will mark the end of the housing cycle. Typically a cycle lasts around 16 years. While London has tended to lead the way at the beginning, the end is normally characterised by a convergence of growth across the regions following a period of prices in the North playing catchup with those in the South. Since the beginning of the cycle in 2008, house prices in prime London have risen by 78%, while in the prime South they’re up 53%.

While there are still many uncertainties that lie ahead, we expect house price growth in PCL to accelerate in 2023. In turn, this means the gap between Prime London and the South should start to close. We expect prices in Prime Central London to rise by 2.0%, outstripping the prime South at 1.5%. A low interest-rate environment should support price growth. However, quicker than anticipated interest rate rises are a risk that could then weigh on growth.

As a new cycle dawns in 2024, prices in the capital are set to rise by 3.0%, outpacing the national average for the first time in nearly a decade. Prime Central London should lead the way like we’ve seen in the past, but subsequent price increases are unlikely to be as steep as those seen at the start of previous cycles.