The government’s proposal to ensure that all new rental properties have an EPC rating of at least a C by 2025 or 2026 is already shaping investor buying behaviour.

While the proposal remains at the consultation stage, many landlords are already hedging their bets.  So far this year, the share of homes bought by investors with an EPC rating of A-C is running at 50%, the highest figure on record, and up from 39% in 2021 and 33% in 2020.

This uplift has been driven by two factors.  Firstly, landlords have bought more energy-efficient homes where improvement works have already been done.  Secondly, there has been a shift towards investors purchasing newer homes, particularly flats, built within the last decade.  These properties typically carry much better EPC ratings, with almost all awarded a B or C ranking. 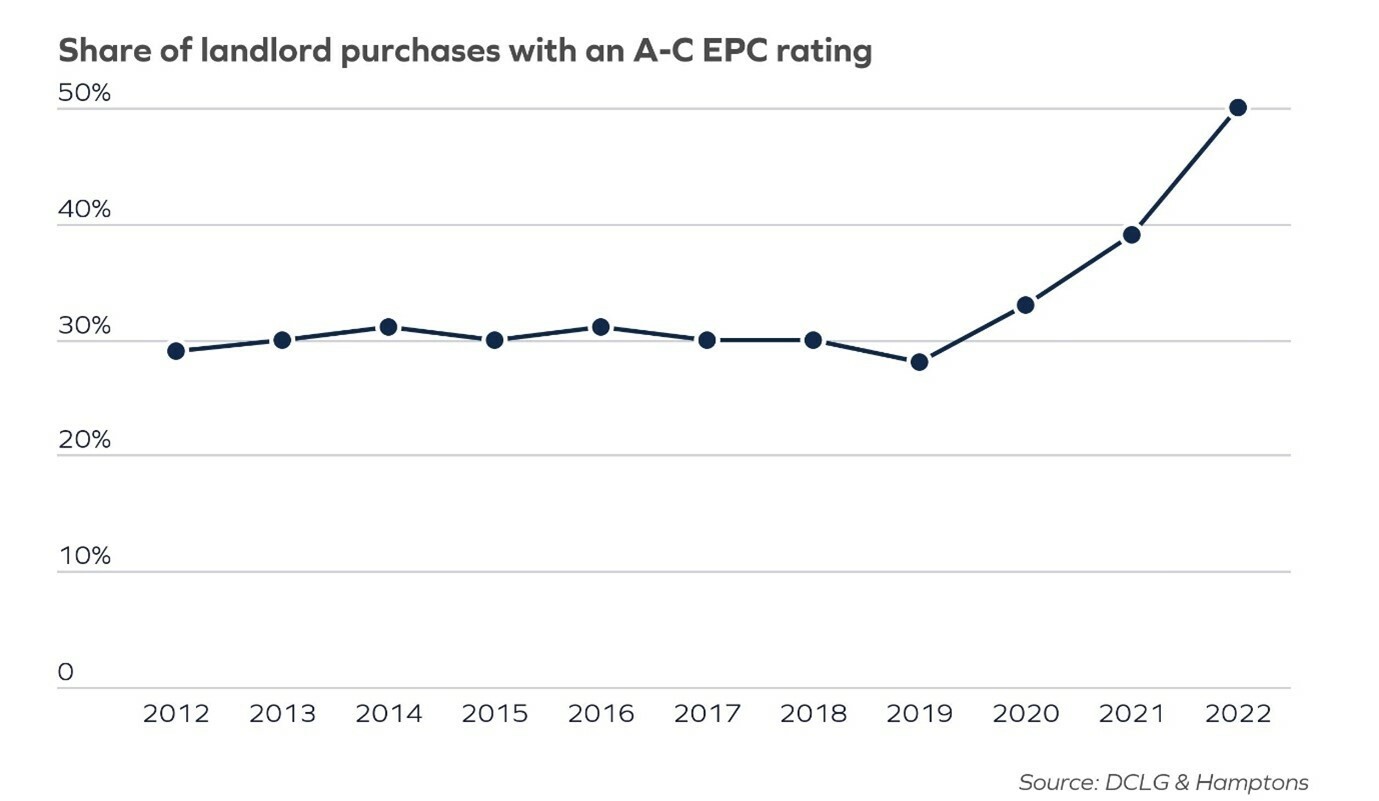 Investors move towards new-build flats means London’s landlords tend to buy the most energy-efficient buy-to-lets anywhere in England and Wales. Here, two-thirds (66%) of new purchases made this year already had an EPC rating of C or above. While further North, investors are more likely to buy higher-yielding, but older and less energy efficient terraced housing stock. Just 34% of investors in the North East bought a buy-to-let with an EPC rating of C or above.

As well as reducing emissions, the push for higher EPC ratings will also save tenants money. The average tenant moving from a home rated D up to one rated C will save an average of £285 per year on their gas, electricity and water bill at current prices. A tenant moving from a home rated E to one rated C will save £725 annually. While, unless exempt, most homes with an F or G rating can no longer be let, the savings from an upgrade to C stand at £1,348 and £2,404 respectively.

Given it will prove impossible for all homes to secure an EPC rating of at least a C without significant cost, it’s likely to mean older homes will become considerably less attractive to landlords. Instead, investors may focus their strategy on buying new builds, with rental homes becoming concentrated in blocks or streets where properties already hold a C rated EPC certificate or where it’s possible to achieve this without significant work. 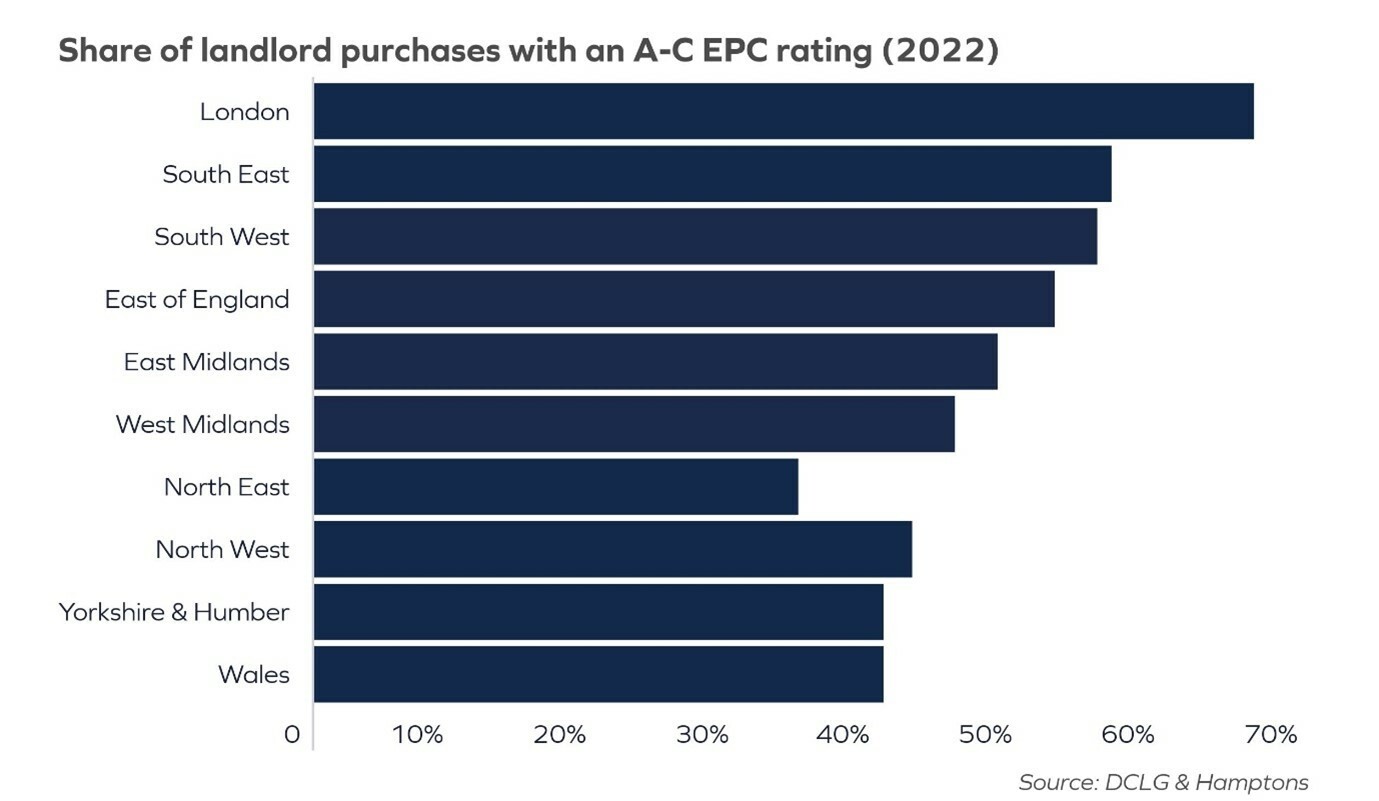 Rental growth continued to cool after hitting record highs over the summer months. January 2022 saw average rents rise 7.0% across Great Britain compared to the same time last year, with the rate of growth falling in all but one month since a peak of 8.7% was recorded in July 2021. The moderation in growth has been underpinned by slowing rent rises across Northern England, which has in part been offset by faster growth across London in recent months.

After 21 consecutive months, January saw rents in Inner London return to pre-Covid levels. The recovery in Inner London rents back to where they were on the eve of the pandemic marks a milestone for London’s landlords. Rents rose by a record 17.3% annually in Inner London to average £2,546 pcm - identical to the March 2020 figure and 29.6% above the mid-Covid low of £1,964. Meanwhile, in Outer London, where rents now stand 9.9% above their pre-pandemic peak, average rents rose 4.0% year-on-year to hit £1,851 pcm.

With Inner London recording the largest ever month-on-month increase between December and January, it appears the recovery in rents still has plenty of steam. The level of pent-up demand coupled with a lack of stock is likely to support high rates of rental growth over the coming months. 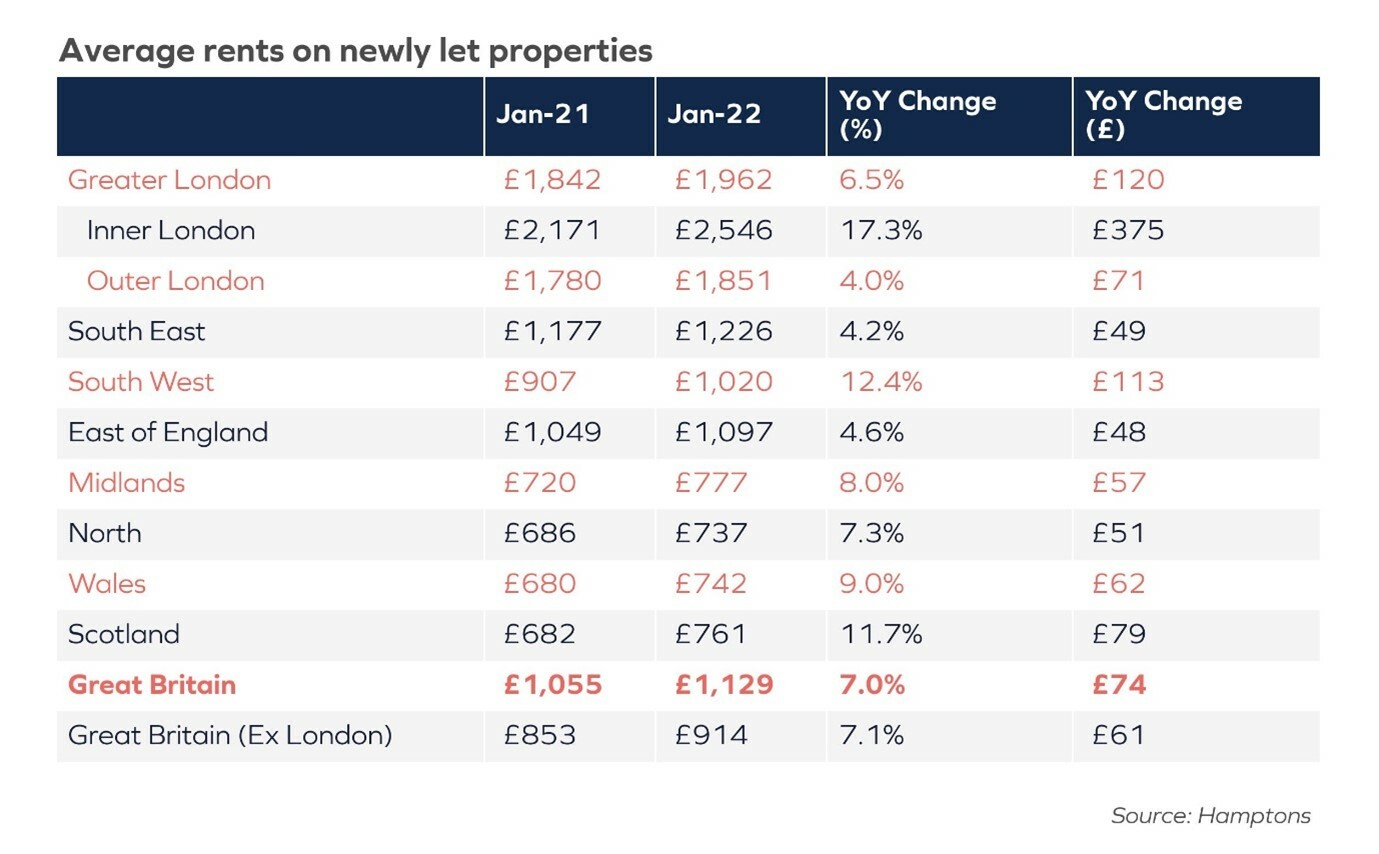