As government regulation has changed over the years, eating into the profitability of the buy-to-let sector, landlords in the capital have had to look further afield for the best returns.

This past year has seen increasing numbers of investors purchase properties. Over the seven months to the end of July 2021, 12% of homes in Great Britain were purchased by an investor. This is the highest share for this time period since 2016, when the 3% stamp duty surcharge on second homes was introduced. Landlords have been enticed into the buy-to-let sector recently by the stamp duty holiday and the fact Covid lockdowns have allowed more affluent households to grow their savings pots.

At present, London has some of the slowest house price growth in the country and buy-to-let properties here offer a weak average gross rental yield of 4.3%. Indeed, only 9% of London homes sold in the first seven months of the year were bought by landlords.

Instead, investors in the capital are turning to other areas that, for the moment at least, offer higher monthly returns. So far this year, a record 63% of homes bought by London-based investors were outside the capital, more than double the proportion seen a decade ago, when just 26% of Londoners purchased an investment property elsewhere. 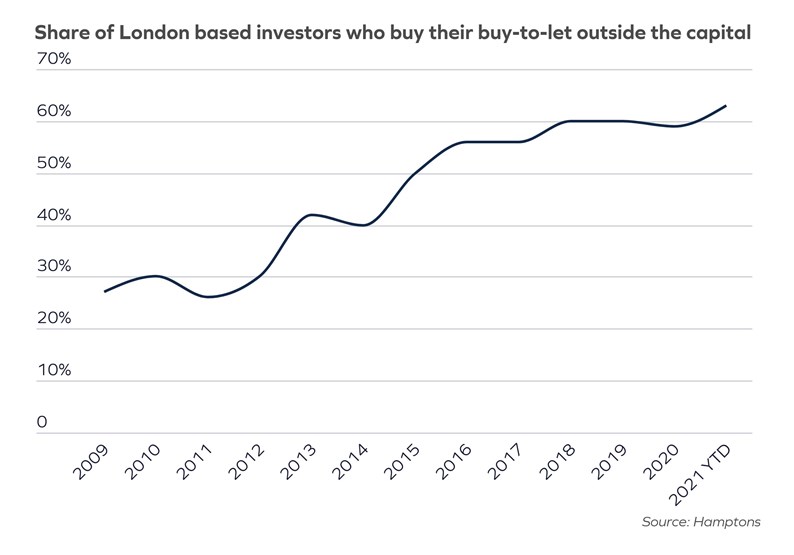 Investors in the capital are also venturing further than ever before. The average London-based investor buying outside the capital so far this year purchased their buy-to-let 108.7 miles away from where they live, twice the 51.8-mile average distance recorded in 2012.

Many of the local authorities bordering the M25 have traditionally relied on investment from the capital. In Dartford, for example, where gross rental yields average 5.7%, 73% of investment properties sold in the past year were bought by a Londoner; in Thurrock, where yields are 5.5%, Londoners bought 44% of all investment properties.

Now, though, the impact of London investors is being felt in areas such as Canterbury, where buy-to-let yields average 5.2% and where 32% of investment properties bought over the past year were snapped up by investors based in the capital.

The North East of England is Britain’s buy-to-let hotspot – landlords bought 23% of all homes purchased in the first seven months of the year – and London investors are increasingly looking to the region for higher rental yields and better capital growth prospects than they can currently find closer to home.

In Middlesbrough, where gross yields average 9.2%, 28% of investment properties bought in the past year went to a Londoner. In County Durham, one in four buy-to-lets purchased went to London-based investors, who were no doubt keen to capitalise on the current 9.6% average gross rental yield on offer in the area.

With investors having to work harder than ever for their returns, buy-to-let is increasingly becoming concentrated in the places where returns still stack up. With prices forecast to rise fastest outside the capital in the coming years and yields in London compressed further by falling rents, it’s unlikely that the stream of London investors looking outside the M25 will slow down any time soon. 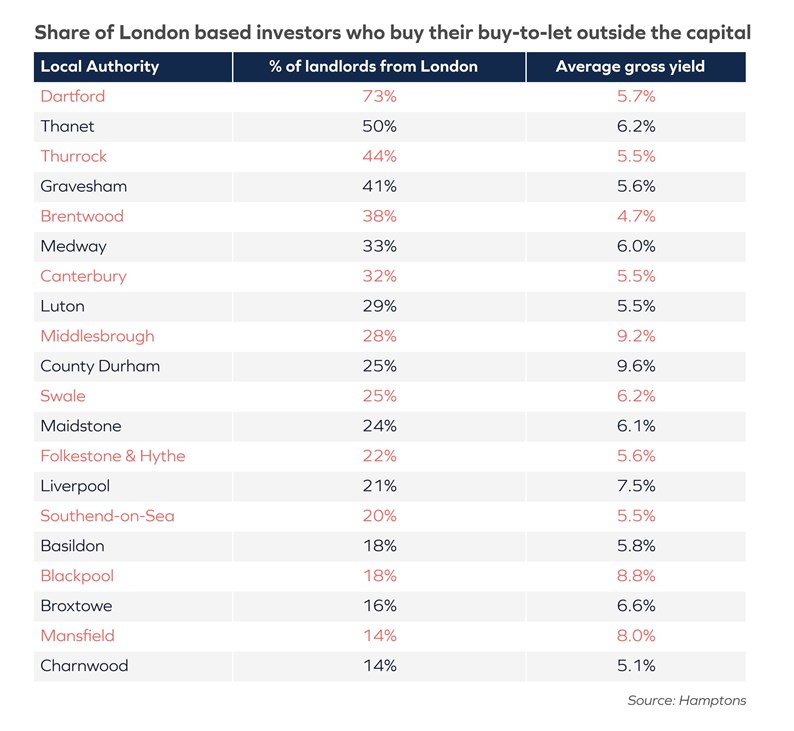