The June lettings index provides us with the first opportunity to report on how the economic damage caused by Covid-19 has impacted rents on newly let properties (those let to new tenants as opposed to existing tenancies being renewed).

During lockdown and acting on advice not to move home, fewer people took out new rental agreements.  This meant that over the lockdown period we took the decision to suspend our core lettings index which focusses on achieved rents on newly let properties.

However last month sample sizes were robust enough for us to report. And in June we found that average rents on newly let properties across Great Britain fell by 0.7%, marking the first fall since February 2014.  June also represented a deceleration in rental growth from the period pre-lockdown when rents were rising at an annual rate of 1.2% in February 2020.

London was hardest hit.  Year-on-year rents in the capital were down 4.5% last month, the biggest fall since our index began in 2014.  Inner London, with a 7.4% year-on-year drop, was responsible for driving the fall.  This was the biggest decrease on record and all but wiped out last year’s rental growth of 7.5%. 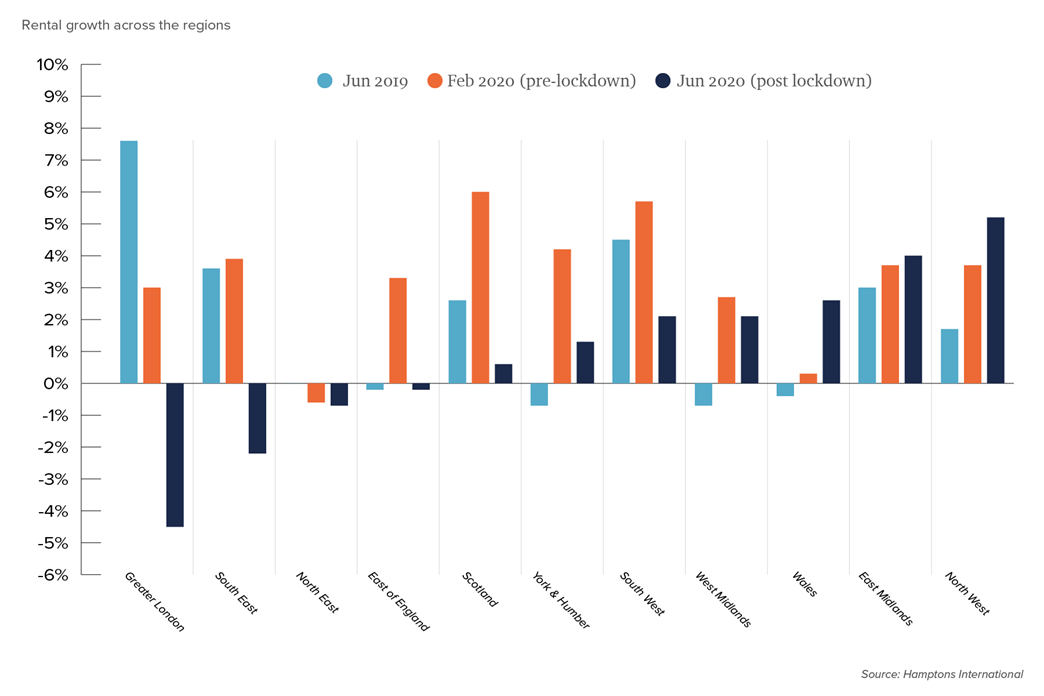 An increase in stock levels - there were 14% more homes available to rent in the capital last month (26% more in Inner London) compared with the same period last year – combined with a fall in demand (-9%), explains much of the reason behind the falls. 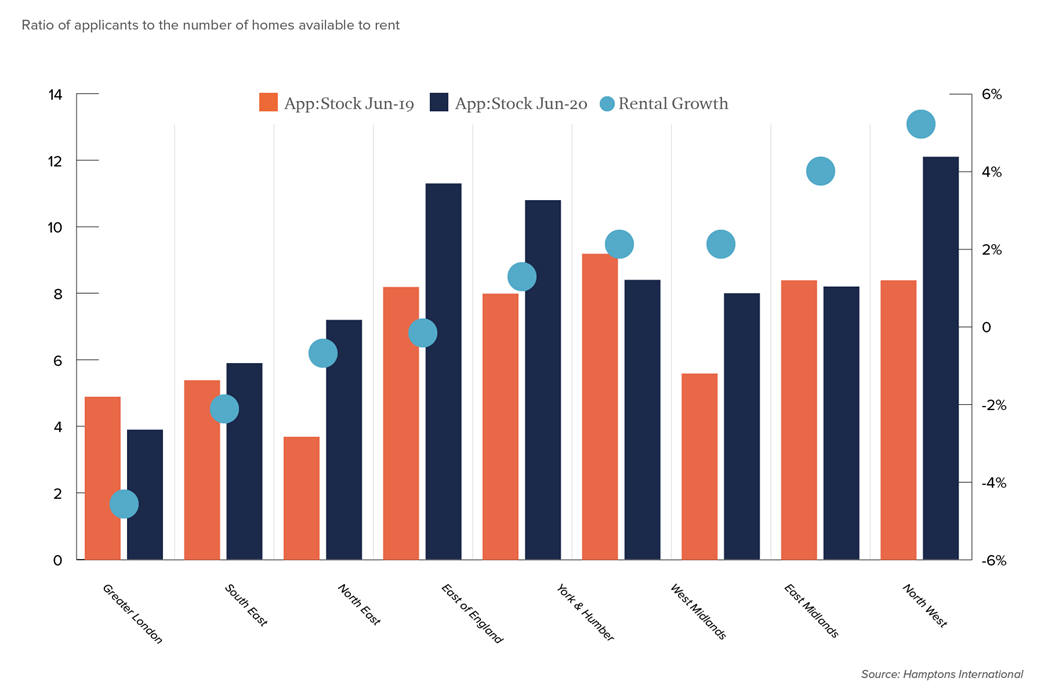 And in the North West, the region recording the strongest rental growth last month, demand heavily outweighed supply.  Stock levels in the region fell 26% year-on-year while the number of people looking to rent increased 6%.  As a result, there were 12.1 applicants looking for every property available to rent, the highest ratio in the country, and up from 8.4 in June last year.

“Activity in the rental market has returned to pre-lockdown times, with the number of new tenancies agreed last month rising to February levels.  Last month’s data gives us a first look at how rents on newly let properties have been affected by the economic damage so far, and it’s clear that there are regional differences.

“In June rents fell in three out of the eleven regions in Great Britain, with London recording the deepest decline.  Rising stock levels in the capital, particularly in Inner London, combined with falling demand from new applicants caused the record falls.  The effect of lockdown has resulted in fewer international tenants, particularly students, as well as an increase in the number of London tenants leaving the capital.

“However the flexibility renting offers has boosted demand in the Midlands and North.  Rents in the three combined Northern regions rose 3.0% in June, six times the rate recorded in the same period last year.

“While the stamp duty changes announced last week are most likely to benefit landlords looking to buy in London and the South, higher yields will continue to entice investors further North.  Any additional increase in rental stock in London could put more downward pressure on rents.  But longer-term, the prospects for rental growth in the capital will depend on whether the short-term increase in supply remains, and most importantly, what the lasting economic damage means for rental affordability.” 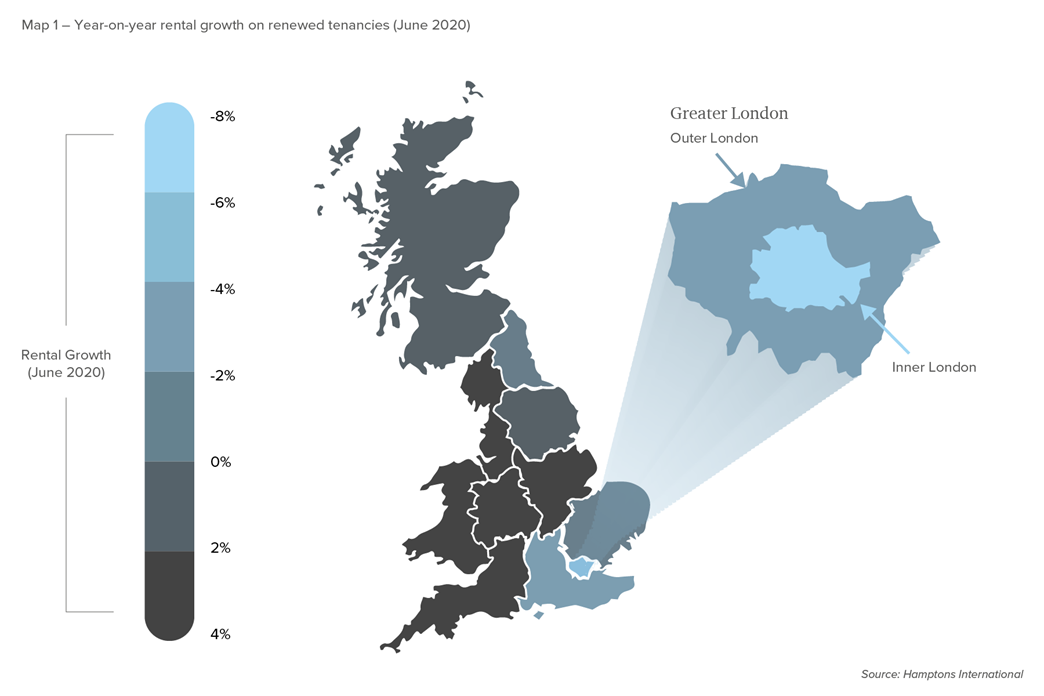 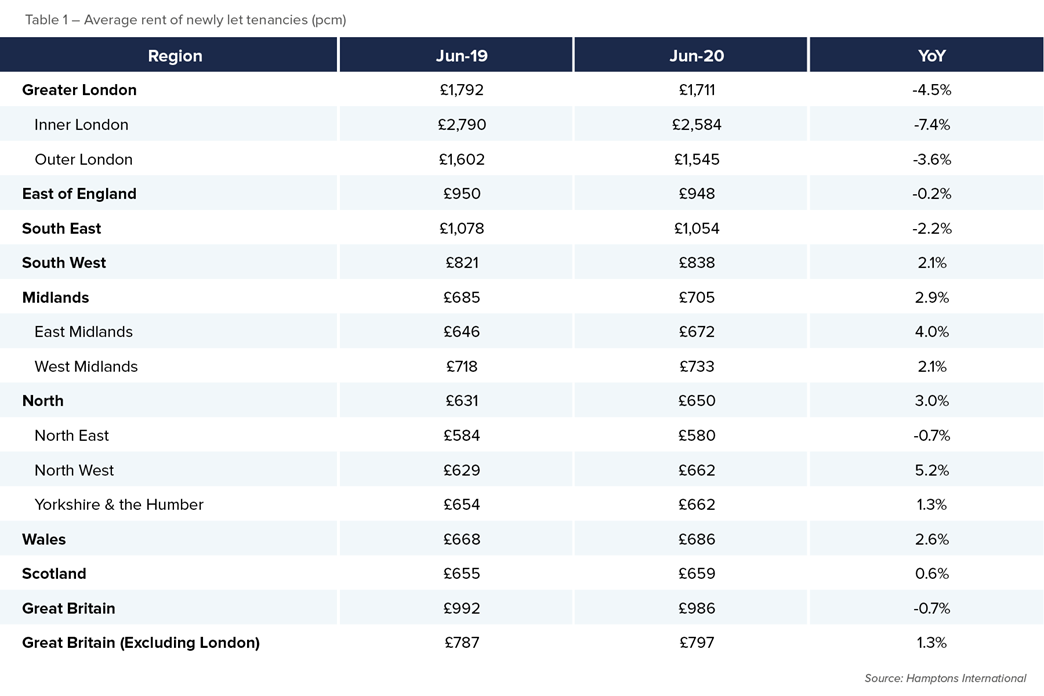