The number of homes being flipped, properties bought, refurbished and sold on within a 12-month window, has fallen over the last couple of years despite a recovery from 2014-2019. This means proportionately around half as many homes have been flipped compared to the years running up to 2007. Despite the introduction of a stamp duty holiday in July 2020, offering investors savings on their tax bill, the number of homes sold twice within a 12-month period has fallen.

Over the last 12 months, 1.7% of homes sold in England & Wales had been bought within a year of the purchase, equivalent to 18,800 homes. By contrast, in 2007 this figure was 3.7% of a very similar number of house sales. For those homes flipped within the last year, the average uplift in value was 35% or £48,000 more than the original purchase price. This relatively low cash figure is a product of where flipping has been concentrated in recent years. 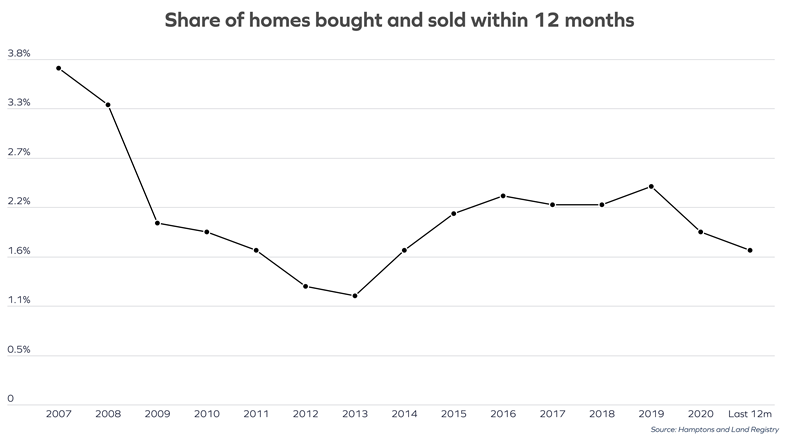 Since 2016, flipping has predominantly become a northern activity. 7 of the 10 local authorities with the highest share of homes flipped are in northern England, with the other three in the Midlands or Wales. After 8 years as England and Wales’ flipping hotspot, Burnley has been knocked off the top by County Durham where 14% of homes sold this year had been bought within 12 months of the purchase. Waltham Forest is the only London local authority in the top 30.

This northward shift has been driven by where price growth has been taking place given it’s easier to make money in a rising market. But this shift is also about stamp duty. With most flippers paying the 3% second home surcharge (or 4% in Wales), higher stamp duty bills in Southern England have made flipping an increasingly unprofitable exercise.

In theory, rising prices coupled with a stamp duty holiday should have proved a boon for anyone looking to flip a home. But in reality, this hasn’t been the case. The current lack of homes for sale has made it increasingly more difficult for flippers to find properties they can add value to and then secure them at a price which allows them to make a profit when they come to sell.

The end of the stamp duty holiday coupled with higher prices means more stamp duty is payable. This eats into investor margins and means we’re unlikely to see the number of homes flipped rise any time soon. Until at least the end of this house price cycle, flipping is likely to remain a predominantly northern activity which takes place in lower value markets.