Buyers in search of a staycation location or a lockdown refuge acquired 24,090 second homes in the 12 months to the end of March. These deals accounted for just 2.1% of all purchases, a level which has remained stable for the last decade, despite the controversy that routinely surrounds second home ownership.

As expected, the stamp duty holiday encouraged more people to acquire a pied-a-terre or a hideaway, although they do not entirely escape tax. The 3% surcharge on second homes and buy-to-let properties, introduced in 2016, is still payable on such deals. This additional levy has been discouraging landlords from adding to their portfolios in large numbers.

But the figures indicate that those who long for a place by the sea, in the countryside or in the heart of a city are less concerned. During the first three months of this year, 6,950 second homes were snapped up, the highest number recorded in the first quarter of any year since our records began in 2009.

Our list of the top 30 second home hotspots in the last 12 months reveals that the city lights retain their pull, but that the sea exercises the most powerful draw. Scarborough, the North Yorkshire resort with its 23 beaches was the most sought-after destination. The average house price in the town is £181,870 Welsh locations – Anglesey (average price £199,960) and Gwynedd (£179,020) – were in second and third place in the league. Wales was the most popular region among second home buyers, accounting for 12.2% of sales.

The South West made up 6.3% of purchases, thanks to the appeal of Torbay (£212,620) and South Hams, the Salcombe district (£349,410), but also of Bath (£393,880) which underlines the allure of a location with handsome architecture, great restaurants and general urban buzz.

Thanks to this combination, Kensington and Chelsea is in fifth place in our league. The average price in this borough is £1,220,510. But over the last few years, the dip in central London prices made pied-a-terre’s more affordable to the high-net-worth group.

Other sought-after London secondhome locations included Camden (£822,940), handy for the City and the West End, and Richmond-upon- Thames (£686,620) with its village-like atmosphere and handsome riverfront. Their appearance in the league suggests that people are betting on the return to workplace and the re-opening of theatres and clubs. 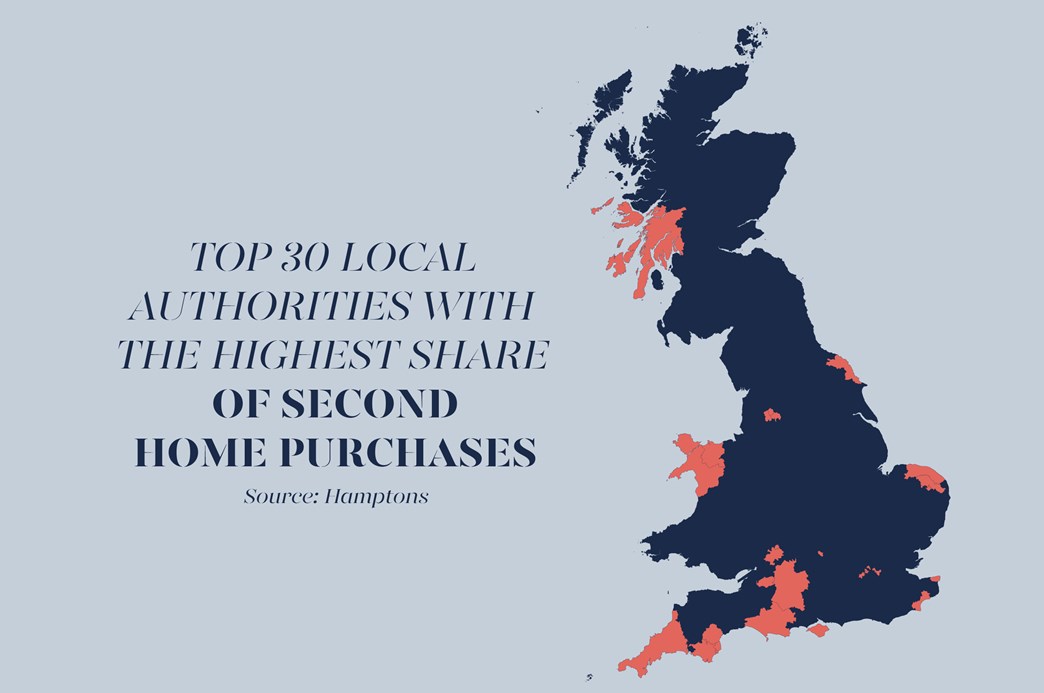