Rents have been rising at a record-breaking pace. But, even when this growth slackens in most regions, private sector tenants will feel the squeeze as inflation surges, driven by higher prices for gas and electricity.

As a consequence, the extra cost this year to tenants of higher rents and household bills will be some £4.6 billion. In some regions, rent and bills will account for more than two-thirds of take-home pay, that is post-tax income. The pain could be worst in the North and Midlands where rent rises are accelerating, in contrast to signs of a slowdown elsewhere.

In 2021, tenants across Great Britain spent a total of £77.8 billion on rent and other household bills, 6% more than in 2020. This year’s increase is set to be considerably steeper.

The mounting pressure on tenants is bad news for the wider economy. People tend to prioritise paying their rent and essential bills. They will have less left over for other types of expenditure, including discretionary purchases. 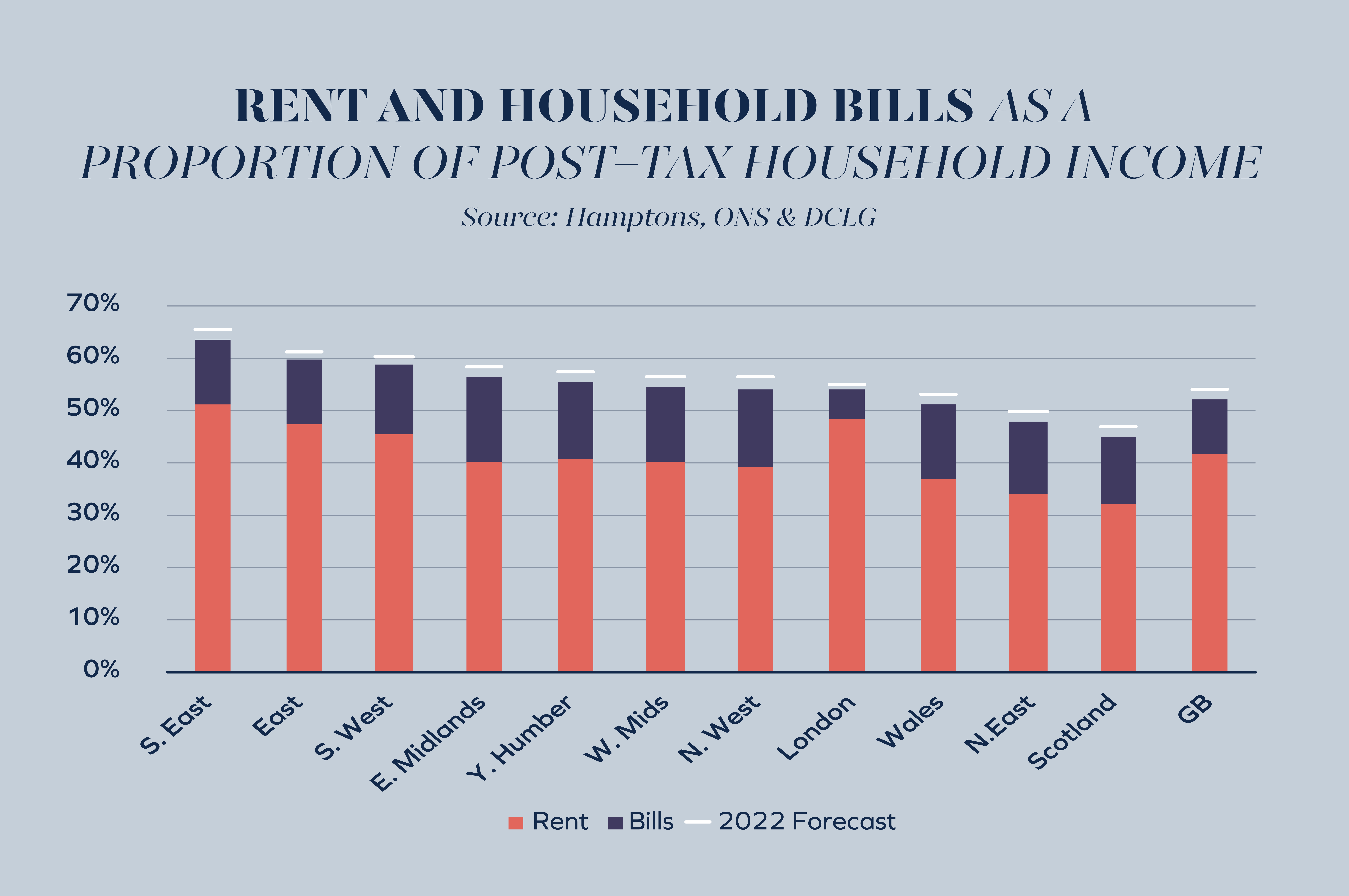 We expect the rate of rental growth to decelerate rapidly from its current annual average of 7% to about 2.5% by the end of this year.

But this fall will be offset by sharp increases in other higher household bills such as gas, electricity, council tax and broadband. These bills are set to rise by 15% this year, significantly outpacing earnings growth which is expected to be just 3.75%.

Once household bills are added in, this figure rose to 52% of post-tax income in 2021, the highest proportion since 2016. But, as the cost of living crisis deepens, we estimate that spending on rent plus bills will account for a record 54% of post-tax income. The average expenditure for each household will be £17,914, up from £16,906 in 2021. 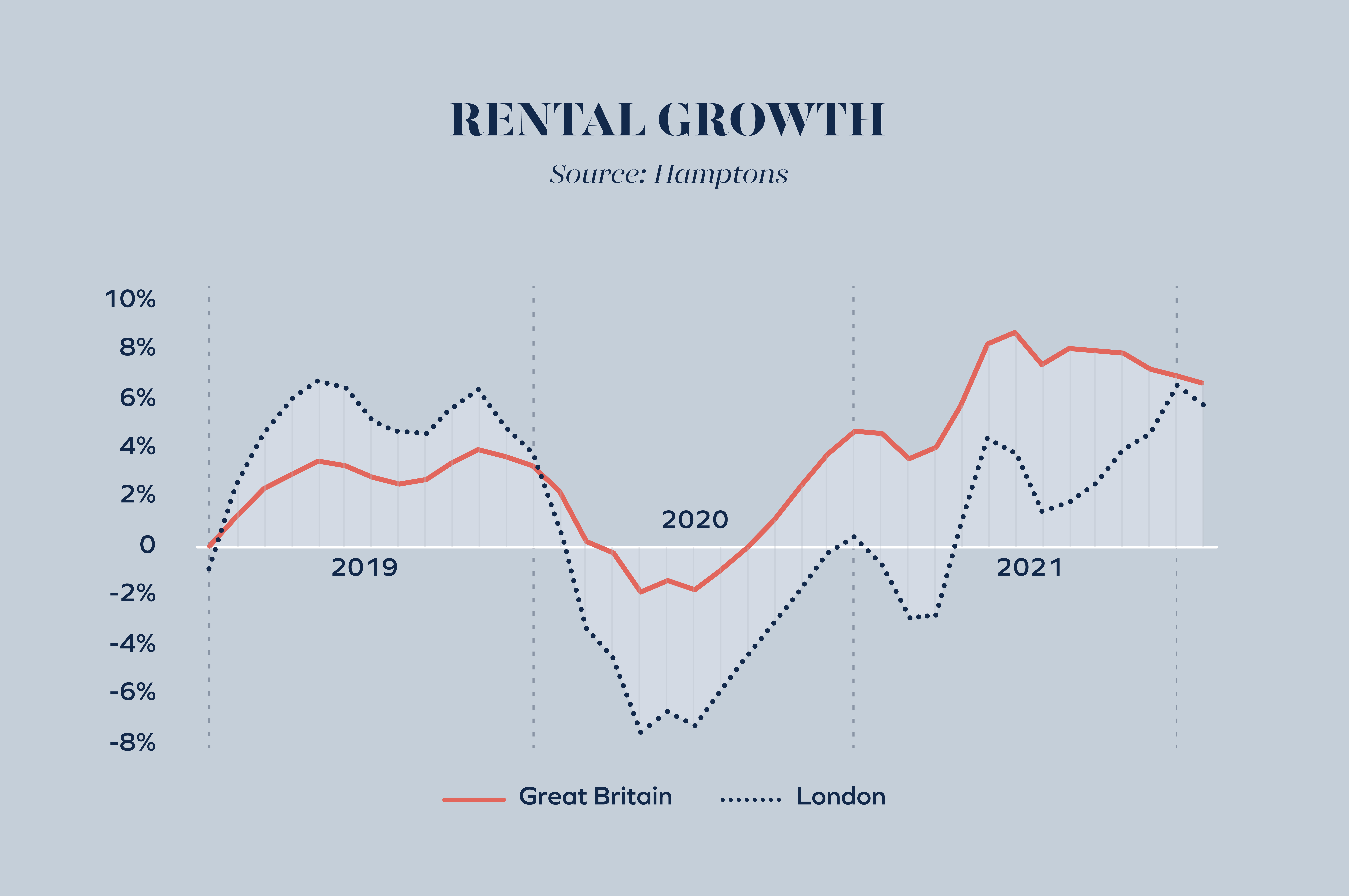 RENTS AND HOUSEHOLD BILLS BY REGION

Tenants in the East Midlands will be hardest hit by the soaring cost of living. Currently they spend 16% of their post-tax income on bills, the highest of any region. The average household will spend 58% of income on rent, plus bills, against 56% in 2021.

In London, by contrast, household bills account for just 6% of post-income tax income: salaries are higher in the capital. Also London rental properties tend to be newer, smaller and better insulated, which lowers energy usage.

Nevertheless, rents in the capital are more expensive than those elsewhere. As a result, the average London tenant paid £23,380 on rent in 2021 - which equated to 48% of posttax income.

Rapid rental growth since the start of the pandemic is having the greatest impact on tenants in the south of England. The South East, for example, is the only region in which rent makes up more than half – 52% - of the average tenant’s income. Fuel and other bills add another 12%.

Rental growth has been slackening since the autumn of 2021 in most regions. In July 2021, the annual rate of increase on a new tenancy peaked at 8.7%. By January, this had slowed to 7.0%, falling to 6.7% in February. Yet, despite the drop this was still the strongest rate of growth recorded in any February since our records began in 2013.

Traditionally, squeezes to household finances tend to come from recessions coupled with falling wages. This makes the current pinch in household finances unique, with fairly strong wage rises coupled with even bigger increases in the cost of living. While the forecast slowdown in rental growth over 2022 is good news for tenants, how long it takes for utility bills to get back towards something like normal levels is going to define how well-off households feel over the next couple of years.