WHAT THE INTEREST RATE RISE MEANS FOR THE HOUSING MARKET

As expected, on 5th May the Bank of England raised the base rate by 0.25 percentage points to 1%, taking it to its highest level since 2009. Although the move has generated plenty of column inches, its impact won’t be felt by everyone.

Only those people with variable-rate mortgages will see an immediate increase in their monthly mortgage repayments. This group accounts for only 19% of all borrowers – down from 72% a decade ago – so most people will be insulated for now because they are on fixed-rate loans. However, the Bank’s move will affect the 1m people whose fixed rate is set to come to an end this year, as well as those looking to take out a new mortgage.

Mortgage rates have already been increasing, with lower loan-to-value (LTV) deals, especially 60% LTVs, seeing the biggest rises – these borrowers are likely to be older homeowners who have already accrued substantial equity in their homes. Nevertheless, mortgage rates are still low by historic standards and some households will still be securing cheaper deals today than they could two or five years ago. Interestingly, rates on 10-year fixes have come down, which implies that markets think rates will fall again in a few years’ time. So too have rate on higher LTV deals.

Which areas will be most affected?

Hamptons has analysed the impact of a 0.25%, 0.50%, 1.25% and 2.25% rate rise for someone buying with a 20% deposit in every local authority in the country. As well as assessing the effect on a mortgaged purchase, we have also looked at the local authority as a whole to see how many people bought in cash in 2021. Areas with high proportions of mortgaged homeowners will be most affected, whereas those with large numbers of cash buyers will not be so exposed.

Across Great Britain as a whole, the 0.25% rate rise means borrowers will see their monthly mortgage payments increase by an average of 2%, or £27 a month. On the face of it, this is not much, although it does alter the amount of gross income needed in order to secure a loan. Nationally, it means lenders will require borrowers to have an average additional annual income of just over £1,000 in order to borrow the same amount.

However, with further rate rises likely over the coming months, repayments and gross annual income requirements increase further to service the additional interest within the same 25-year mortgage term. A further 1.00% rise to the base rate would push up average monthly payments by 17.1%, or £228, and increase the required household income from £39,466 (before last week’s rate rise) to £49,043. A 2.0% rate rise would increase payments by 26.5%, or £352, and raise the household income level requirement to £54,260. 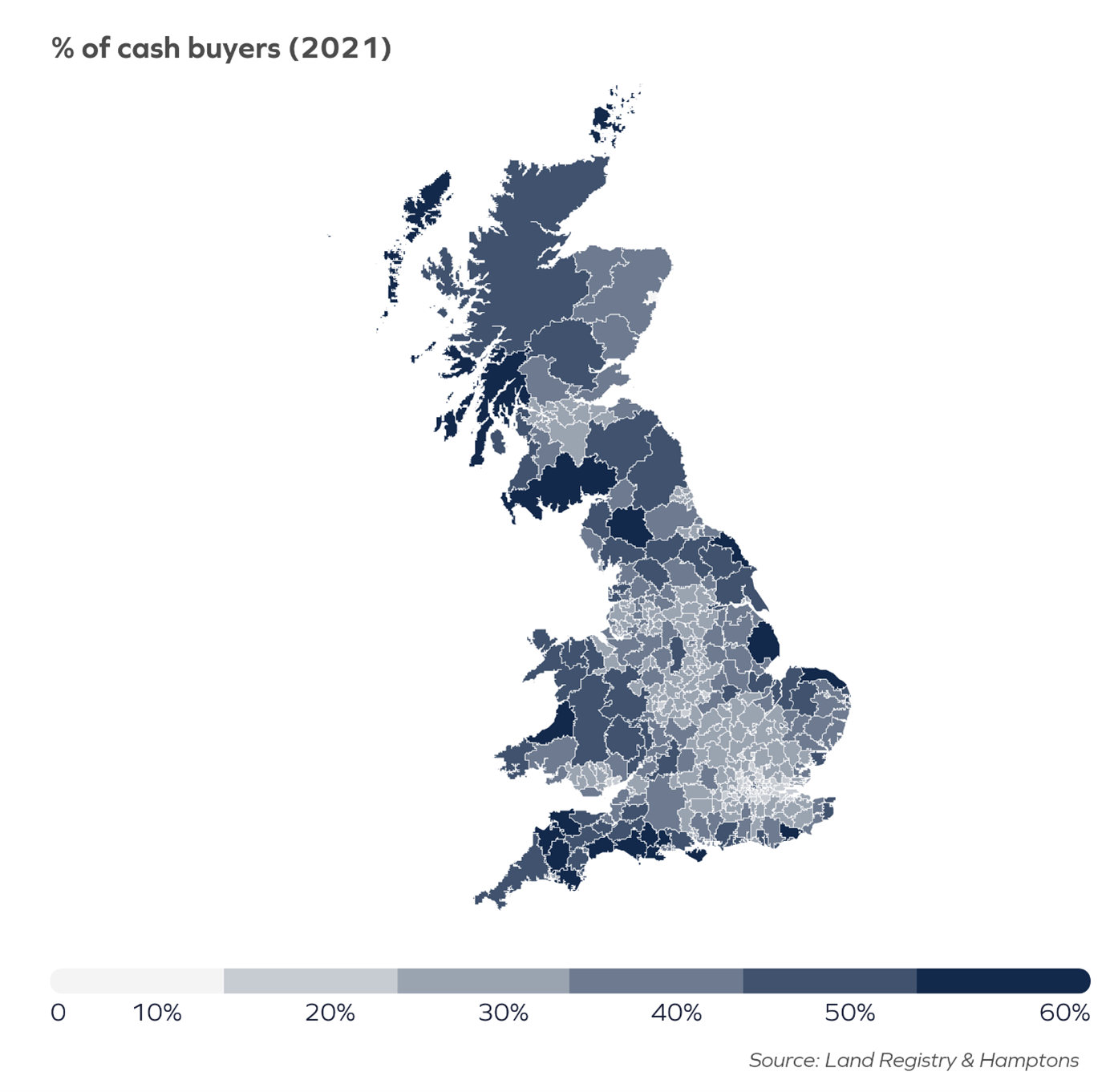 This methodology allows us to identify the places most at risk from rising interest rates. These are typically the cheaper parts of London, such as Barking and Dagenham, Waltham Forest and Lewisham, and of the South East of England, including Slough, Crawley and Dartford. In these areas, only 10-15% of purchases are in cash, far below the national average of 29%. Older homeowners, who are most likely to be cash buyers, typically move out of these urban areas which, because they are cheaper, often have high numbers of first- and second-time buyers, who tend to be most highly leveraged.

Conversely, locations with higher levels of cash buyers will be more resilient to the impact of rising mortgage rates because fewer homeowners are likely to become forced sellers when the cost of servicing a home loan increases. These are rural and coastal areas that are popular with downsizers and holiday home buyers, such as Dumfries and Galloway, Scarborough, the Isle of Wight and Ceredigion. North Norfolk and East Lindsey, in the East Midlands, have the highest numbers of cash buyers – in 2021, 60% of purchasers paid cash for their properties.

What does it mean for buy-to-let investors?

The average landlord paying higher-rate tax could see all their annual profits on their mortgaged buy-to-let property wiped out if the base rate rose to 2.75% (assuming the increase is passed on to mortgage rates in full). The average rate on a typical 75% LTV interest only buy-to-let mortgage is currently 2.1%, according to the Bank of England, and a rise to 4.1% will see profits completely erased. A 1% rate rise will cut profits in half.

For landlords paying lower-rate tax, the outlook is slightly better. Given they receive full tax relief on mortgage interest payments, the base rate would need to rise to 4.25% to wipe out all profits (again, assuming it is fully passed on). This means mortgage rates would have to reach 5.6% for the average buy-to-let to lose money, while a 1.5% increase in the base rate would see profits halve. 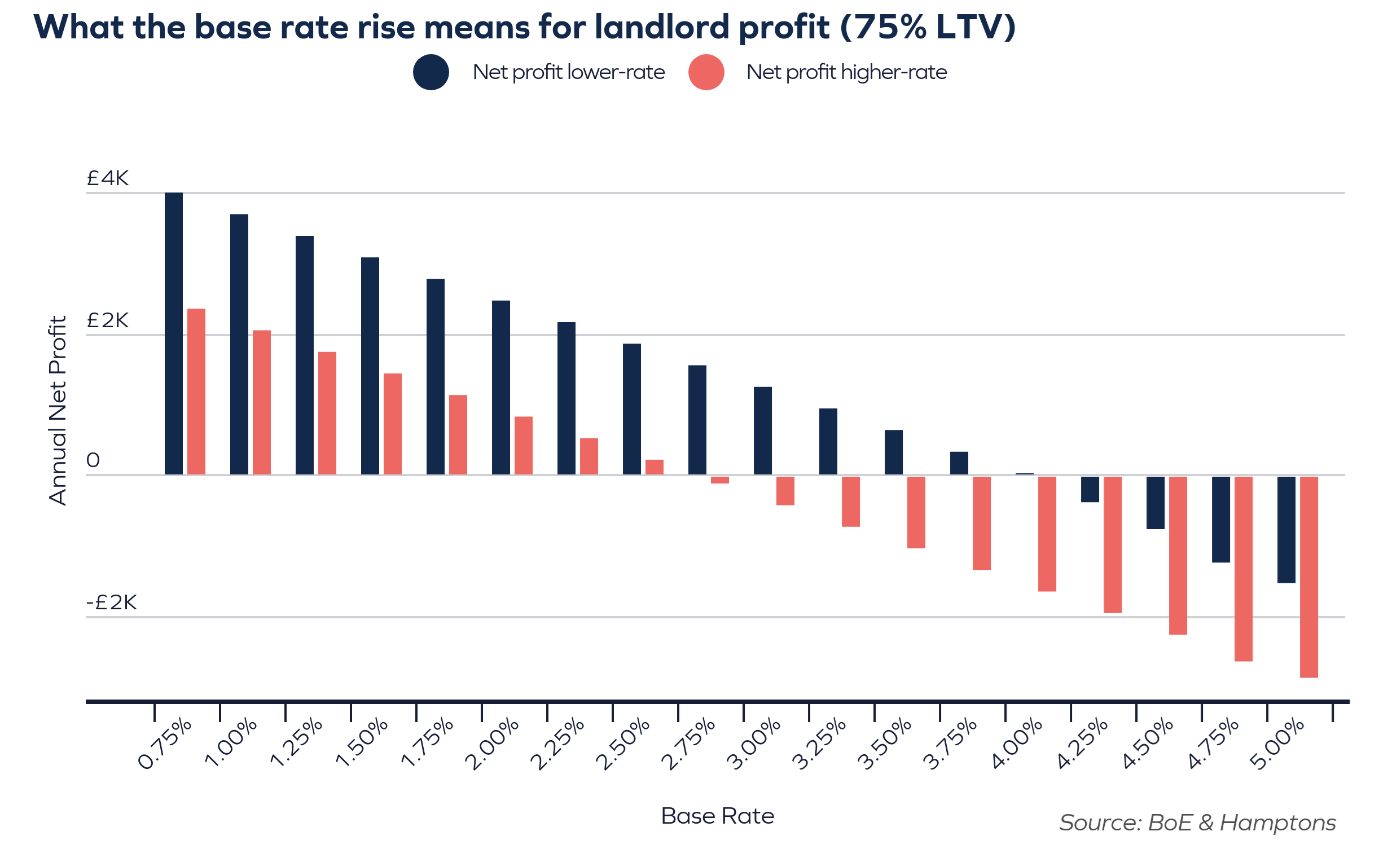 We based these figures on a Freedom of Information request we sent to HM Revenue & Customs, which showed that in the tax year ending April 2021, landlords filing a self-assessment tax return spent an average of 31% of their rental income on expenses including maintenance, insurance, professional services and legal fees. When combined with the average buy-to-let property value of £202,000, this allowed us to estimate the level at which rate rises threaten profitability.

Like homeowners, most investors are on two- or five-year fixed-rate deals so the impact of rising rates won’t be felt immediately by everyone. Also, it’s likely that investors will start to adapt before profitability is wiped out completely. This will probably be through a mixture of incorporation – March saw 5,000 incorporations, the second highest month on record – and paying down debt, either from savings or by selling off parts of a portfolio.

What will happen to rates in the future?

The members of the Bank of England’s Monetary Policy Committee are in a tricky spot as they have to weigh up soaring inflation (the Bank forecasts it will rise above 10% this year) against a weakening economy. We foresee a few more hikes this year, with the base rate reaching 1.5% by the end of 2022, before peaking in 2023.