The early summer months have seen house price growth hit the highest rate since 2014. While prices are rising in most markets up and down the country, in rural areas price growth is running nearly twice as fast as in cities. Over the last 12 months, rural prices are up 14.2% compared to an increase of 6.8% in urban areas.

Rising prices across rural Britain have been driven by buyers looking for more space. With many free at least in part from the ties of their daily commute, suburban search areas have been extended into the countryside. As a result, the number of buyers registering in our rural offices is up 50% on 2019 (while in urban areas they remain flat).

At the same time, far fewer homes are coming up for sale in the country, as more would-be sellers chose to stay put. So far this year there are six weeks of rural instructions missing compared to 2019. It took from 1st January 2021 to 31st May 2021 for the same number of rural homes to come onto the market as between 1st January 2019 – 17th March 2019. This means there are currently 36% fewer homes for sale in rural areas than there were at the same time last year.

While this demand for country living is in part Covid induced, even without Covid it is likely that rural prices would have been rising more quickly than urban ones. Over the last decade, city prices have risen by 90% while rural areas have seen growth of 55%. It was always likely that by this stage in the market cycle they would have been playing catch up, although perhaps at a slower rate.

What happens next remains the million-dollar question. Covid has turbo-charged working from home, a trend which was growing, albeit slowly. Changes that might have taken place over 15 years were compressed into the space of 15 months. The final easing of lockdown is likely to bring the next wave of workers back to their city centre desks. But for many others, what was a temporary shift to working from home may turn out at least in part to be permanent. 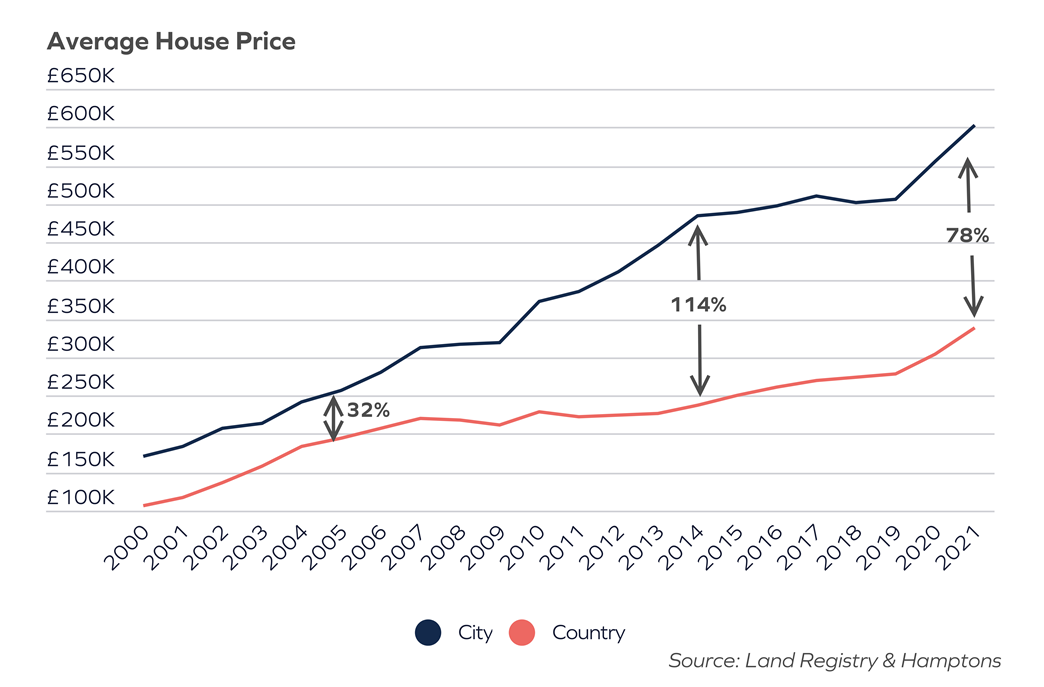