For the last 21 consecutive months, rents in Inner London have been falling.  The pandemic saw tenants leave the city lights behind them as the countryside and pastures new beckoned.  At their low in April, the average home in Inner London cost 22.1% less than it did in the previous April.

However, November marked a turning point. The resumption of office life and global travel has meant that for the first time since January 2020, rents in Inner London have returned to growth.  In November, rents in London’s 13 Inner boroughs rose 3.9% when compared to the same month last year, rising to average £2,329 pcm, up from -0.1% in October.

People returning to work, students beginning a new academic year and the start of life returning to the capital culminated in demand from prospective London tenants rising by 14%, and this at a time when there were 71% fewer homes to rent.

In another first, November was the first time in 20 months that the rate of Inner London rental growth caught up with Outer London.  A change in working patterns since the pandemic began has driven tenants to seek more space, boosting rents in the suburbs, while suppressing demand for inner-city living. 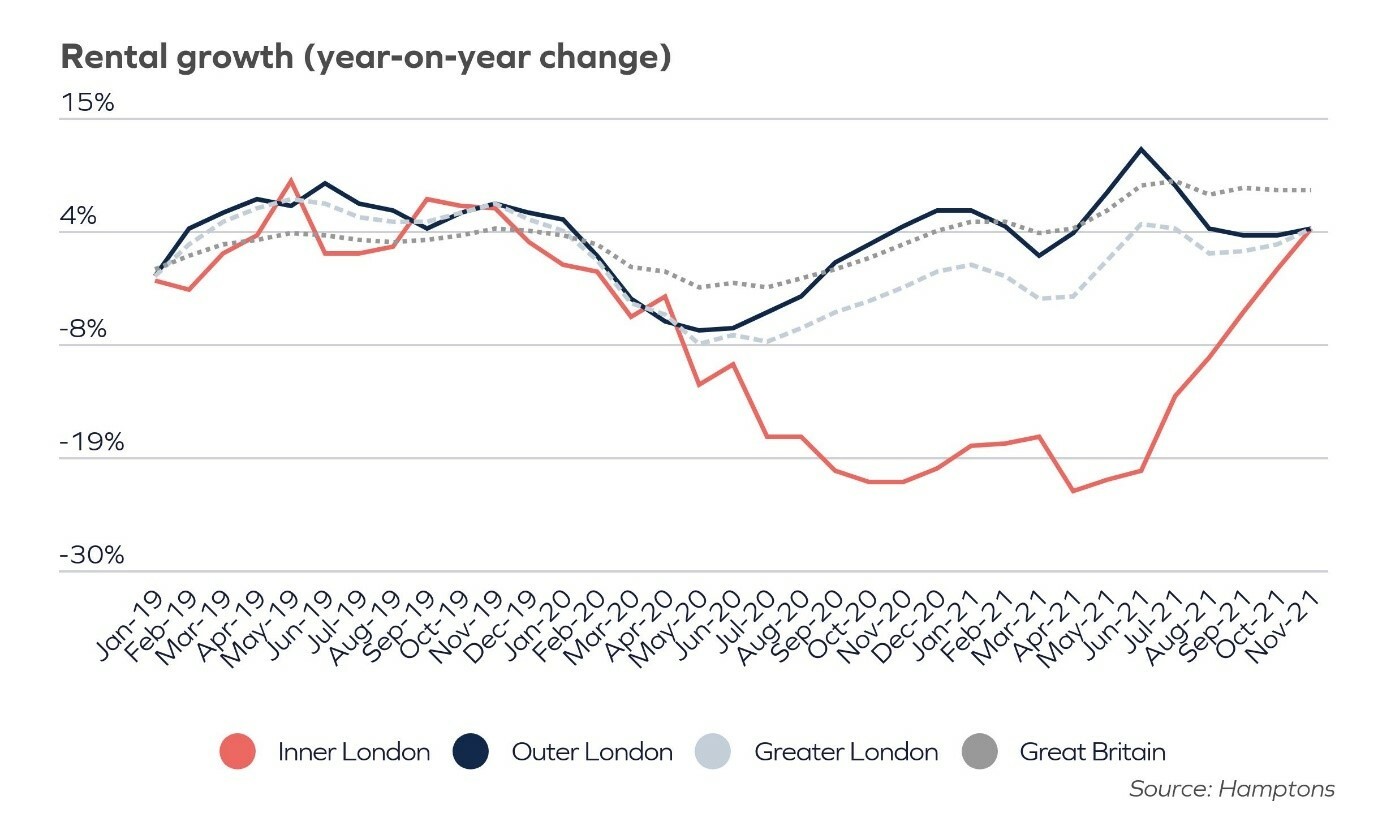 A slow start to Inner London’s recovery has meant that rents outside the capital have risen nearly three times faster than those in London since the pandemic began. Across Greater London, rents have risen 5.9% since January 2020, but outside London rents have increased 16.1%.

Nationally, the South West has seen the strongest rental growth since the pandemic began, with rents up 23.5% (or £195 pcm) since January 2020. A lack of stock and a continuation in tenants’ willingness to pay for more space has fuelled growth. Having recorded eight consecutive months of double-digit growth, the South West continues to top the rental growth league with rents rising 14.6% over the last year. 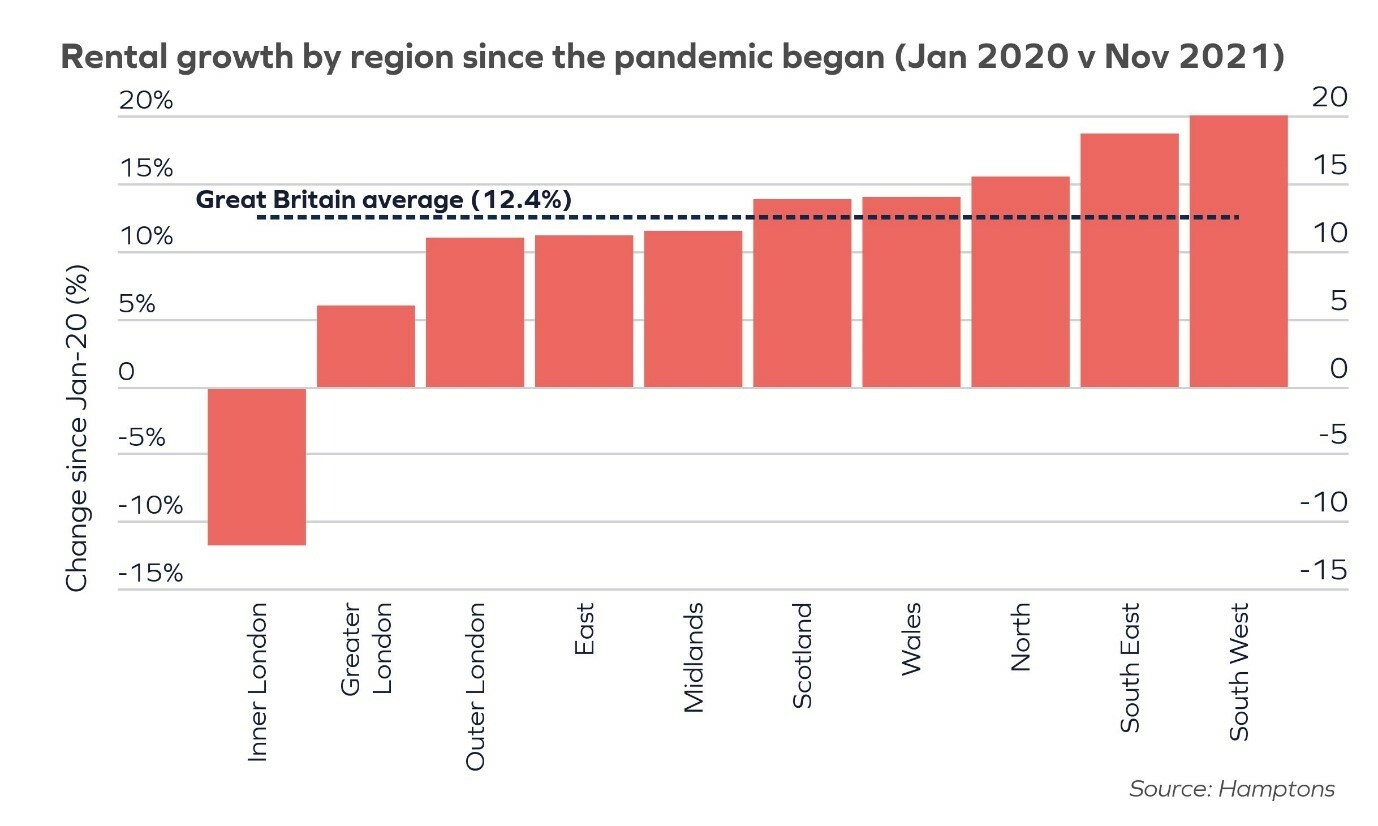 But what lies ahead for rental growth? A lack of stock has caused rents to rise 7.9% across Great Britain over the last year, marking the strongest rental growth recorded in any November since our records began in 2013. While there are few signs to suggest that stock levels will increase next year, we expect the rapid pace of rental growth to slow as affordability barriers set in and household budgets come under further pressure. We expect rents across Great Britain to rise 2.5% in Q4 2022.

The pandemic has divided London into a city of two-halves. Rents in Inner London have been hardest hit, but they are picking up pace. While there’s still a way to go, rents in Inner London are on track to reach pre-pandemic levels by the middle of 2022. This means, in a reversal of this year, we’re likely to see Inner London rents outperform Outer London in 2022. 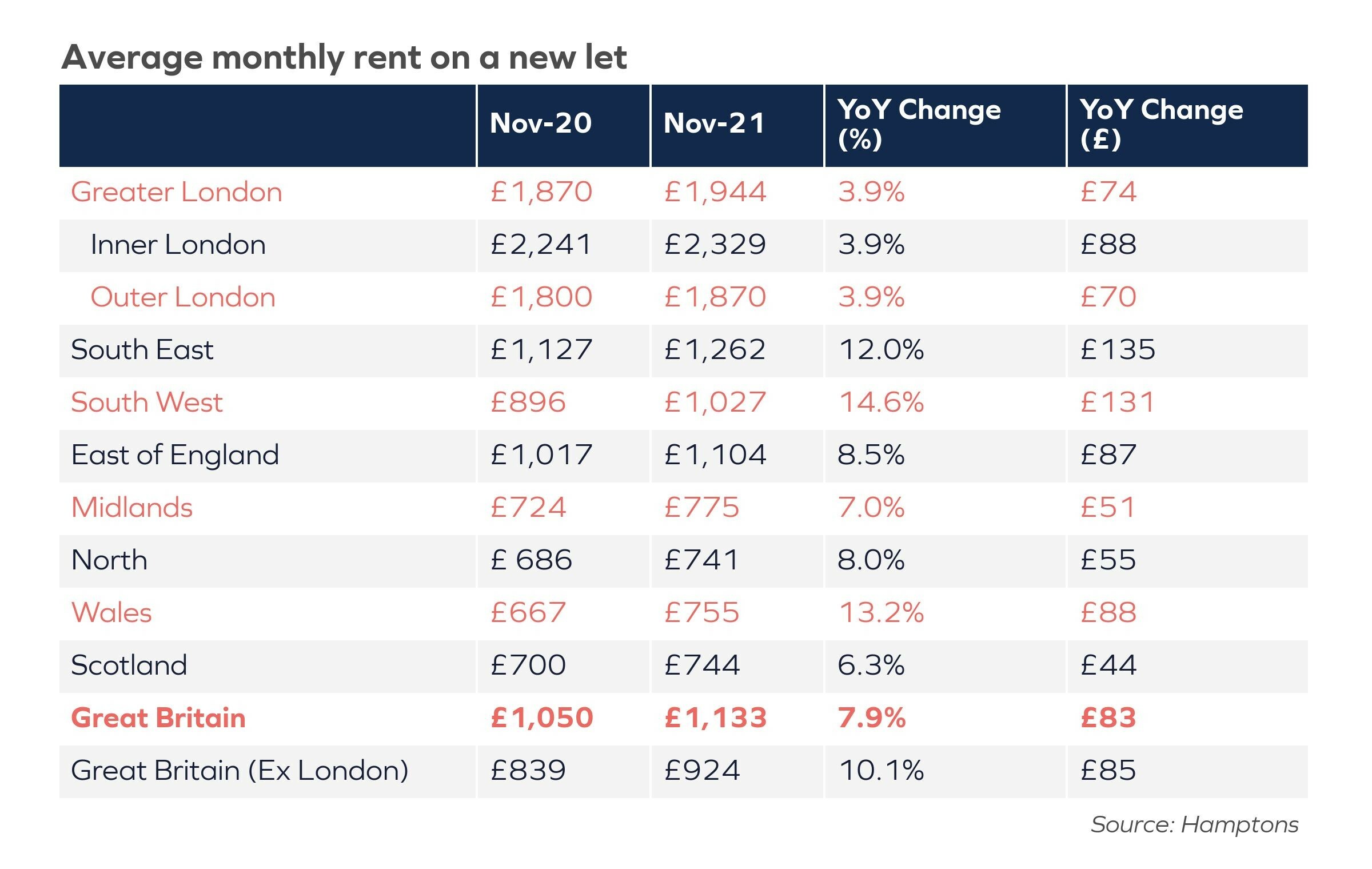