Houses are rising in value twice as quickly as flats.  As more people have searched for more space, the average price of a house has risen 11% over the last 12 months, compared to 5% for a flat. But this 5% average growth figure masks a broad differential between flats with gardens and those without.

Over the last 12 months, flats without a garden fell in value by 0.6%, while those with a shared garden rose in value by 7.4%. Flats with a garden command more of a premium, and it's these properties where prices have risen by 8.7%.

Garden space has become increasingly more important to buyers. 43% of flats sold so far this year had some sort of access to a garden – either a private or a shared one. This is the highest figure for five years, partly driven up by the fact that flats with outdoor space have been in higher demand.

This leaves the average flat with a private garden 40% more expensive than a flat without a garden, coming in at £379,000 compared to £270,000. The size of this differential has widened since the onset of the pandemic, rising from 27% in 2019. While there are other factors at play, such as the size and age of the flat, the presence of a garden accounts for a significant part of the differential.

Flats least likely to have a garden, or access to one, are generally found in medium-sized blocks. Meanwhile, around 10% of all flats in Great Britain are in converted houses, with over half having access to some form of green space. While 12% are in blocks of 50 or more, with over 90% of these having access to a shared garden.

It seems likely that over the coming months, and possibly even years, flats with a garden or at least an element of outside space are going to be an easier sell than those without. But flats, even those without outside space, remain a fundamental building block of the housing market. 45% of first-time buyer purchases this year have been flats, buyers who are likely to make a record number of purchases in 2021. 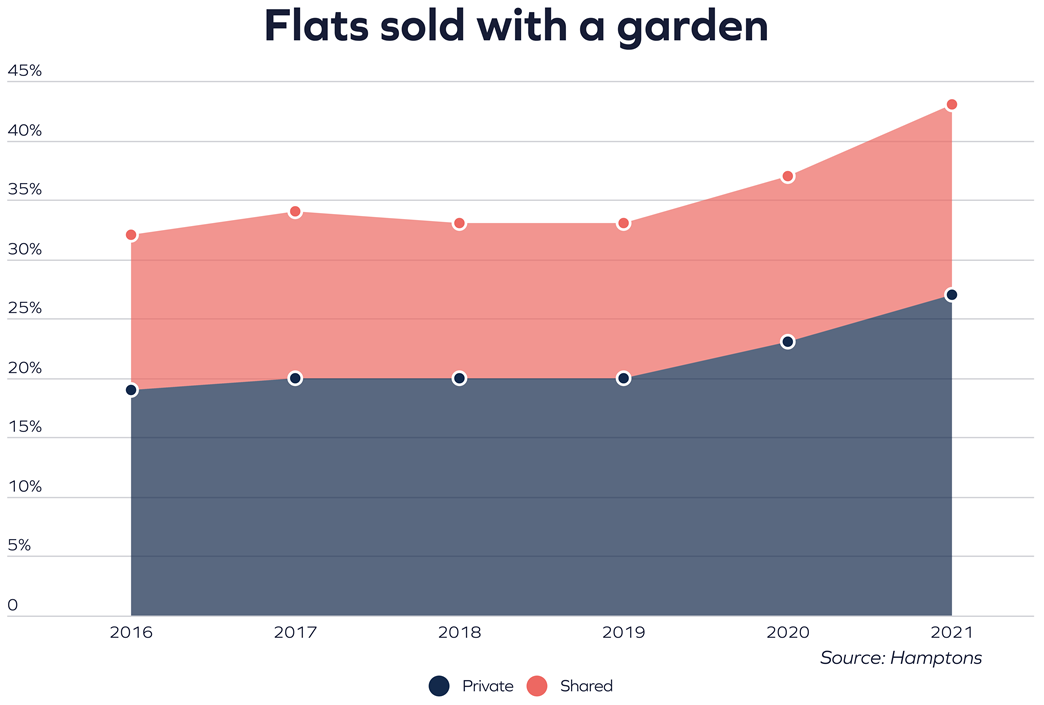