Foreign buyer numbers fall to lowest level in a decade

Covid-19 hit international travel hard.  As Government’s across the world locked down borders and restrictions into and out of countries tightened, buying property abroad became increasingly difficult.

To put this into context, over the last decade international buyers have made up around half of all purchasers in London’s priciest postcodes and despite global lockdowns, this was still the case in 2020.

But a lot has changed for international buyers purchasing property in England during the last year.  Since April foreign buyers have been subject to a 2% stamp duty surcharge.  And this at a time when Sterling strengthened - making London property more expensive than last year.

But with prices in Prime Central London 11% below their 2014 peak and the £ 19% weaker against the US dollar, property in one of the world’s priciest cities, is looking, relatively speaking, good value.

In Prime Central London, the portion of buyers from every country outside the UK has dropped over the last year as the market has become increasingly dominated by domestic purchasers.  Even so, EU and Middle Eastern buyers still bought 13% and 9% of homes respectively in Prime Central London during the first six months of the year.

International purchases in Greater London have been more resilient, although are still at a nine-year low.  The share of homes bought by foreign buyers across Greater London fell from 30% in 2020 to 23% during the first half of this year.  Middle Eastern buyers were the only international buyer group to increase their share since 2020.

While the return of international buyers is still very much pinned to coronavirus, we expect numbers to rise towards the end of the year and into early 2022 as global travel opens up.  And this should provide a boost to London’s prime postcodes. 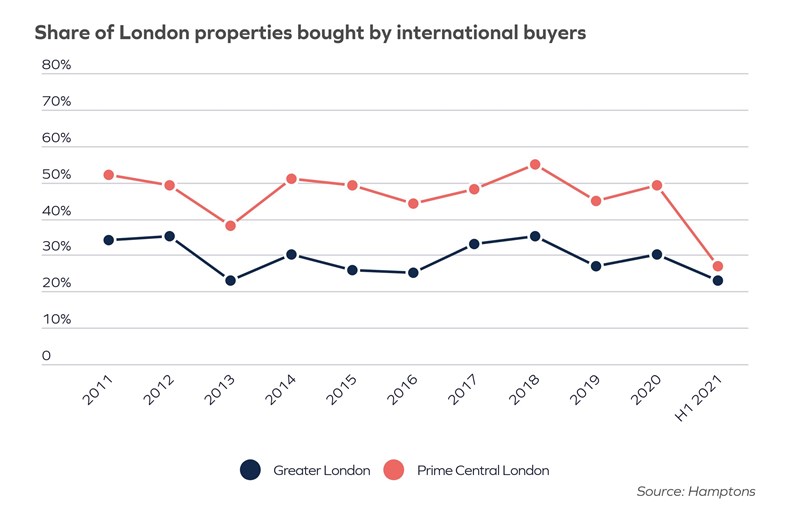