The property market in 2021 has consistently confounded expectations on every front – from the level of demand for homes to the willingness of lenders to offer discounted mortgages. The cost of some loans are now falling to historic lows.

As a consequence, more homes could be sold this year than since 2007 – the market’s pre-financial crisis peak. We would also argue that the trends that have emerged in 2021 could be a reference point for the market’s future direction. As a result of the pandemic, property has risen to the top of people’s priority lists, and this is unlikely to change any time soon. Our forecasts – which start on page nine – set out what this may mean for the months and years ahead.

In January, it was thought that the winding-down of Covid support schemes and the waning of the lockdown bounceback would dampen the mood. It was also thought that the wave of pandemic inspired relocation, in which households sought more space and gardens, would fade.

But these predictions did not come to pass which can partly, but not wholly, be attributed to the extension of the stamp duty holiday.

The tapering of the stamp duty holiday meant there was a large spike of completions in June, with another smaller bounce likely in September. The tax break encouraged people to move sooner than they had planned, particularly, it appears, those who had owned their home for between four to eight years. In 2019, 55% of those relocating had owned their home for less than 10 years. In 2021, this rose to 59%, with some prompted to move because their property became too cramped for their needs in lockdown.

The better-off were able to use their equity and take advantage of record low-interest rates. As a result of the house-hunting activities of the affluent, higher-value properties have been more likely to change hands, pushing the average house price upwards.

As the stamp duty holiday was wound down, it became apparent that the wish to move for more space remained undiminished by the disappearance of the tax break, with sales agreed still above 2019 levels, particularly in Southern regions. Record numbers of homes are being sold for more than their asking price. Unlike the end of nearly every other stamp duty holiday, time to sell is increasingly measured in weeks, rather than months, in a growing number of regions.

Indeed, the average seller who accepted an offer in September achieved more of their asking price than a seller who said yes to an offer in April from a buyer enjoying the full stamp duty saving. This was markedly different to conditions at the end of previous stamp duty concession periods.

A lack of stock has proved to be the principal deterrent to relocation. Some homeowners have accepted offers and then struggled to find a place to buy. These conditions have made others rethink a move. Sales by investors, usually those selling without buying, have remained low. Meanwhile, the appearance of more attractive mortgage deals for borrowers with smaller deposits is leading to a pick-up in sales to first-time buyers who do not have a property to sell.

All of which have exacerbated the shortage of stock and supported house price growth which otherwise may have faded as the stamp duty holiday came to a close. In the short term, this scarcity of supply seems likely to persist while the market’s tempo remains lively. Ultimately, it is likely that the market will have to slow before stock levels begin to rise again. 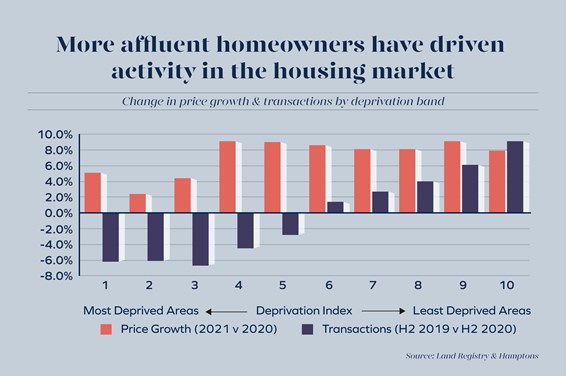 Since the re-opening of the market in May 2020, both transactions and price growth have been driven by more affluent owners buying expensive homes in prosperous areas. The majority of these households are upsizing. They have significant amounts of equity which means they qualify for heavily discounted mortgage deals. Their spending power explains why sales in the most affluent areas were 9% higher in the second half of 2020 than in the same period of 2019. There was a 6% fall in the least affluent areas.