Economic growth (GDP) of 4.8% in the second quarter of 2021 underlines the strength of the UK’s post lockdown recovery. The vaccination drive has been crucial to the bounceback in consumer spending; it has also boosted employment and incomes.

The economy is still around 4% smaller than it was pre-pandemic. But the Bank of England expects households to spend their billions in lockdown savings, which were equivalent to 10% of GDP by April. This should restore the economy to its pre-pandemic level by the end of the year, faster than originally expected. Growth should then return to levels more in-line with those of the pre-pandemic era in 2023 and 2024.

The employment numbers are starting to improve. By the end of July, there were 1.5 million employees on furlough, down from a peak of 8.9 million in May 2020. But the unemployment rate is expected to remain above pre-pandemic levels until at least 2024.

Inflation is fast becoming the principal concern and now seems set to be a key factor in monetary policy decision making over the course of the forecast period. The June CPI rate of 2.5% surpassed the Bank of England’s target. By general consensus, such spikes will be transitory. Although some dissent from this view. If the phenomenon proves more permanent, interest rates will rise sooner than forecast.

We expect a small base rate increase towards the end of 2022, with a return to the pre-pandemic level of 0.5% by 2024. But we also expect mortgage interest rates to hit historic lows early next year, before gradually increasing in 2023 and 2024. 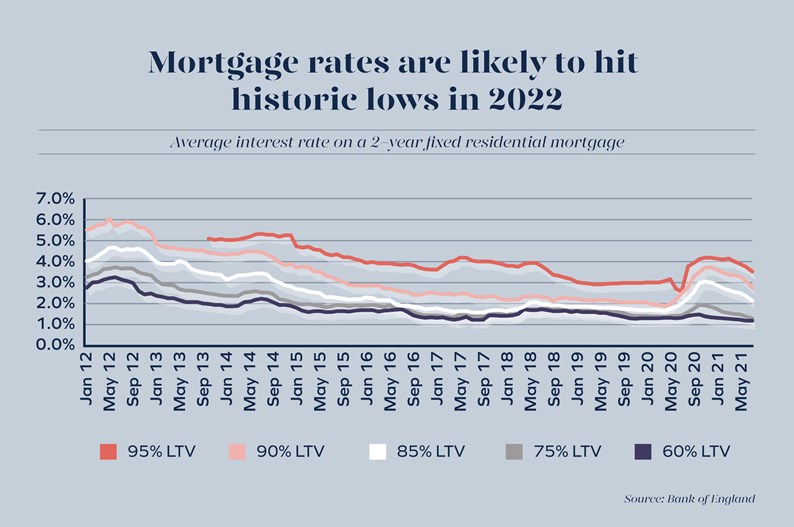