The pandemic precipitated the deepest recession on record in the second quarter of 2020. But government support schemes have cushioned the blow and we are forecasting a 2.0% rise in house prices for 2020. There has, rightly, been much emphasis on the number of furloughed workers who may lose their jobs. But many homeowners have not been furloughed, or suffered a decline in earnings. They are seizing the opportunity offered by the stamp duty holiday to relocate. The withdrawal of government schemes means that the full impact of the economic damage will not be felt until 2021. Job losses are expected to peak in H1 2021, but the economic recovery ought to be underway. This should stabilise the market in the second half of 2021. Price growth should resume in 2022 and the average house price should have risen by 8.0% in 2024.

LONDON
Early in 2020 confidence was returning in London which had been in the doldrums since the first quarter of 2018. The housing market in the capital bounced back quickly, driven by pent-up demand and people choosing to bring forward a long-planned move. Buyers in London benefit most from the stamp duty holiday. We forecast a 2% rise in London house prices in 2020, but a fall of 1% in 2021. This is based on affordability and the surge in households leaving the capital. By 2024, prices should still be 6.0% higher than today, althoughother regions will perform better. To put this into context, London prices have risen by 53% over the last 10 years - against 23% elsewhere. In prime central London international buyers are scarce and people are moving out in search of green space. As a result, we forecast that the prime central postcodes will underperform the rest of the capital over the next two years. But, gradually, buyers should start to see these neighbourhoods as a great place to live, with real estate that’s good value and also a safe haven asset. We forecast growth of 6.5% over the next four years. 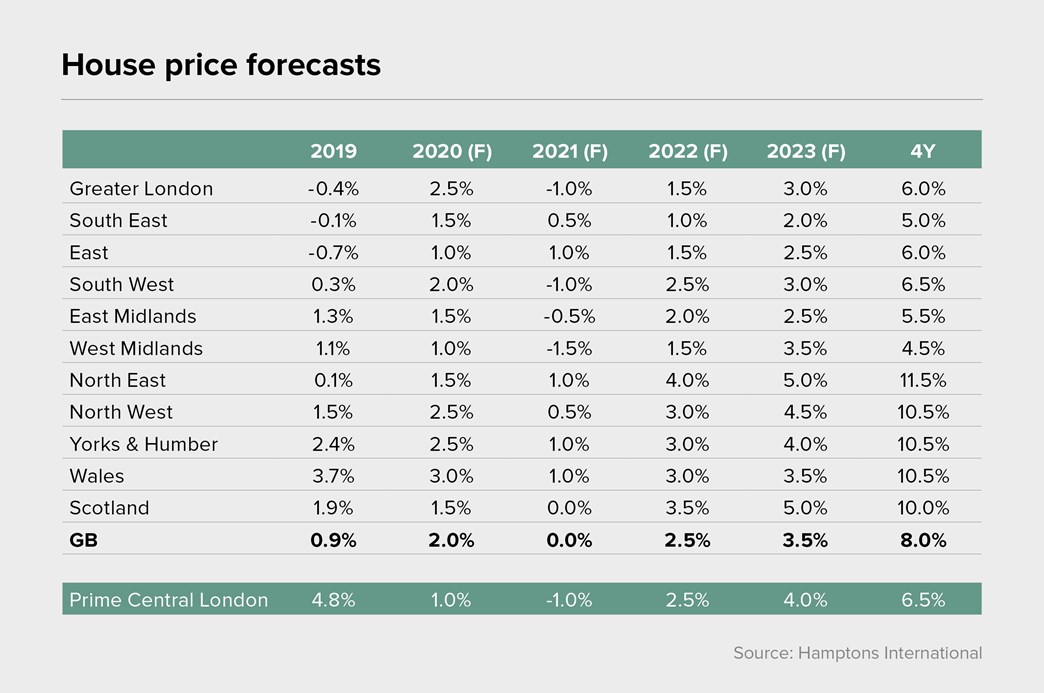 SOUTH
The South East has the country’s lowest furlough take-up rate. It should also benefit the most from the rise in Londoners leaving the city. We expect growth of 5.0% between now and 2024. The East of England has the second lowest furlough take-up rate and better affordability than the South East. As a result, we expect prices to rise by 6.0% over the next four years. By contrast, the South West has the highest furlough rate and its economy has been hard hit. We expect its market to underperform in 2020 and 2021. But this region’s affordability should help it achieve 6.5% growth by 2024.

MIDLANDS
The pandemic has taken its toll on the Midlands which rely on manufacturing. We forecast that the East Midlands and the West Midlands will remain flat this year, and that these regions will be the weakest performers over the next four years, with growth of 5.5% and 4.5% respectively.

NORTH
We forecast Northern regions to lead the price league over the next four years. By 2024, we expect prices in the North East - the most affordable region - to have risen by 11.5%. The North West should also prosper. We forecast that prices in this region will grow
by 10.5% by 2024. Also moving upwards should be Yorkshire and the Humber, thanks to a competitive labour market. We forecast 10.5% growth by 2024.

WALES & SCOTLAND
Wales has the lowest unemploymentrate - and a low take-up of the furlough scheme. As a result, we expect house prices to rise 3.0% this year, with 10.5% growth by 2024. Scotland is the second most affordable region: prices have risen 19% over the last decade, against 53% in London. As a result, we forecast that prices will increase by 10.0% over the next four years. 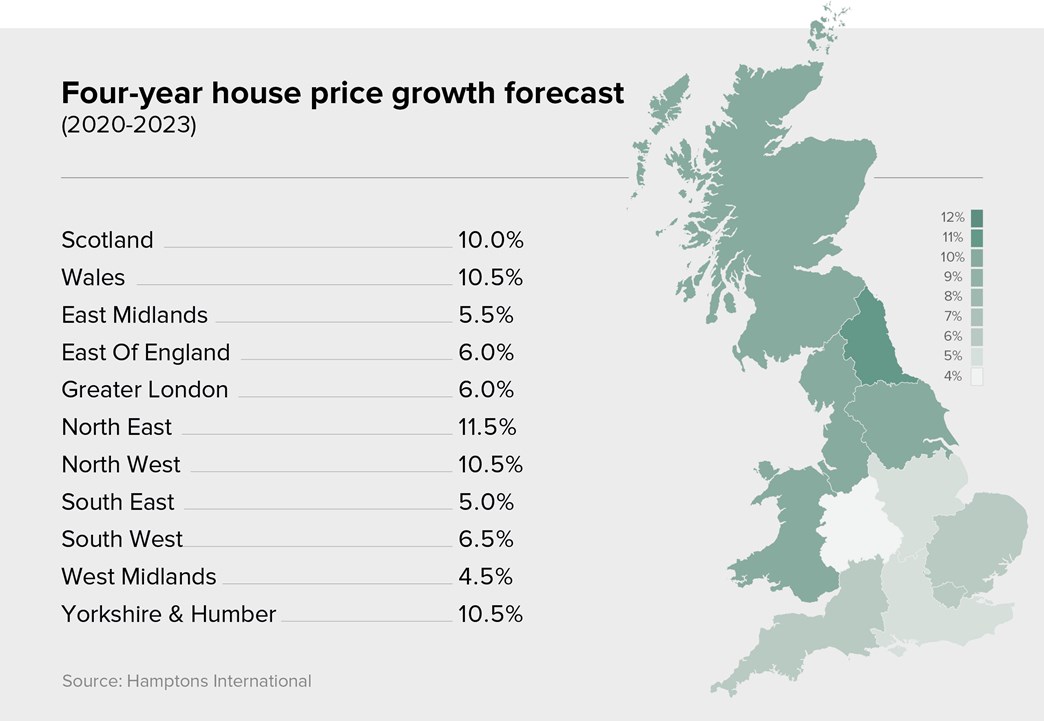