View the PDF
Lying just beyond the Capital’s borders, Caterham’s fortunes have increasingly been tied to London’s as the numbers leaving have surged over the last 18 months. With over half of buyers coming from the Capital, Caterham competes with other towns on the M25 for London leavers seeking space and superior schooling. As one of the few Surrey towns in Zone six, it offers fast and affordable connections into the Capital alongside views across the greenbelt into the North Downs. Its Croydon postcode means buyers budgets tend to stretch a little further here than they do deeper into Surrey. 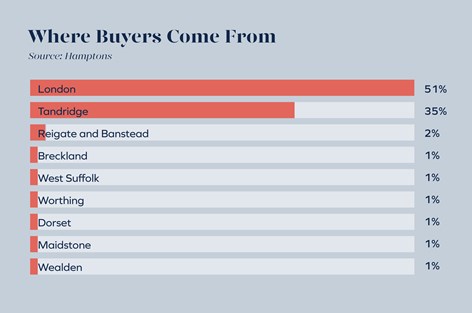 Londoners make up the bulk of buyers in Caterham, with over half coming from the Capital. Two-thirds of these buyers are from Croydon, neighbourhoods south of the town centre in particular. Many of whom are homeowners who have spent decades building up equity before leaving for pastures new. Despite the pandemic reducing people’s ties to transport hubs, many movers still value Caterham’s links into London and easy access to the south coast, but are looking for more space in a quieter neighbourhood. 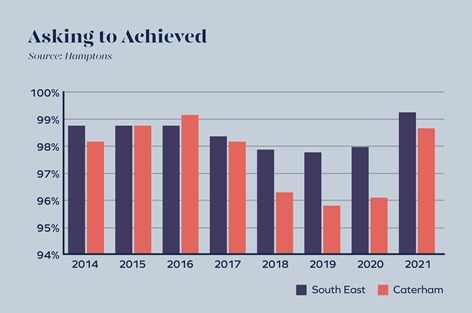 On the fringes of the Capital, Caterham has been well placed to cash in from the post-pandemic race for space. Sellers in Caterham have achieved 98.7% of their initial asking price so far this year, more than in any year since 2016. And it's a similar story across the rest of the South East too where sellers are pocketing 99.3% of their asking price on average, the highest figure recorded at any time during the last decade. 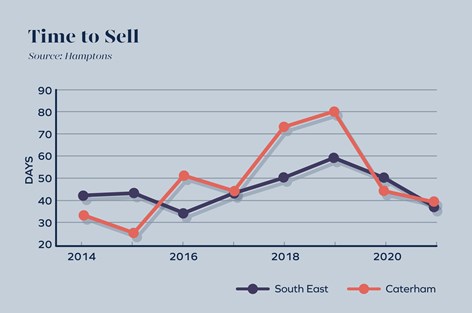 So far this year it has taken 39 days on average to sell a home in Caterham, the shortest time on record since 2015, and around half the time it currently takes to sell in London. Around 10% of homes in the area have been sold within 24 hours of going onto the market. Across the wider South East, the average time to find a buyer is also at a record low. 2021 has marked the fourth consecutive year that it has been faster to sell a home in the South East than in London. 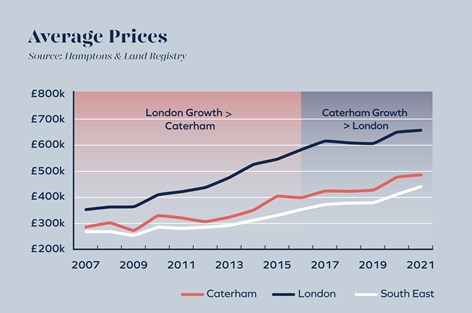 Price growth in Caterham has outpaced the London average in each of the last five years. This means the gap between Caterham and the Capital has closed from a peak of £192,000 in 2017 to £171,000 this year. Buyers budgets have broadly kept pace with rising prices in the Capital, but given most Londoners leave from Zones 4, 5 and 6, price growth in Caterham has been more closely tied to Outer London rather than Inner London. Despite this growth, Caterham remains a relatively affordable part of the South East, particularly given its proximity to the Capital. 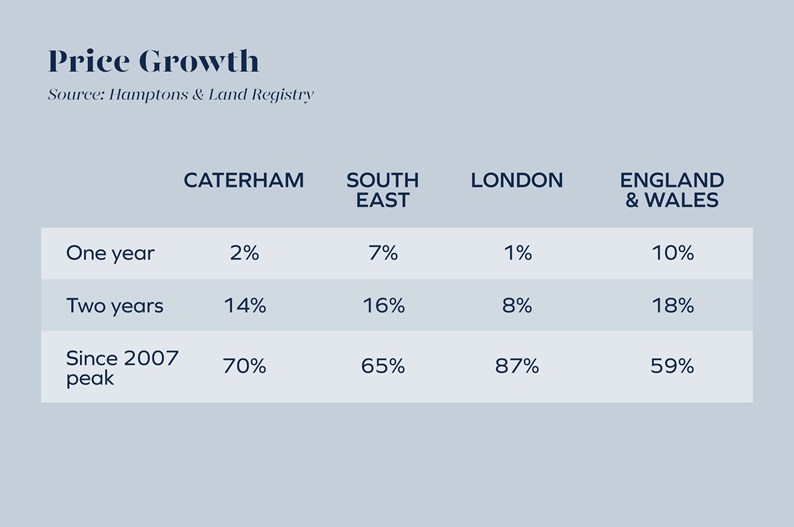 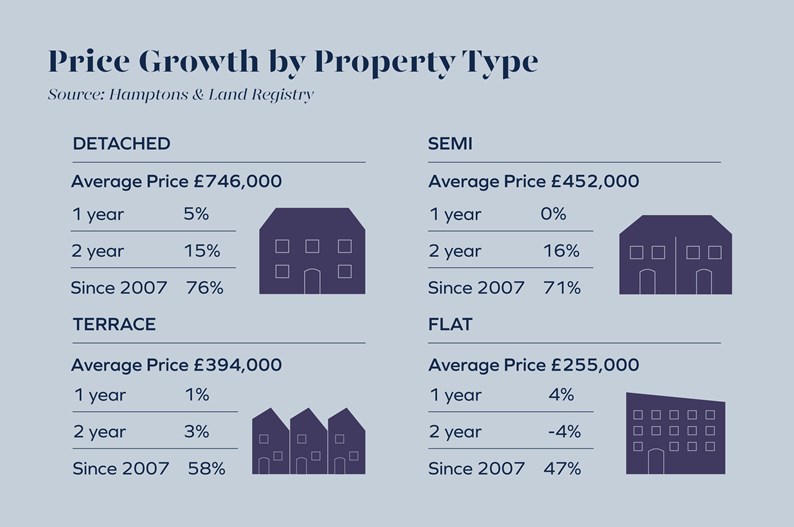 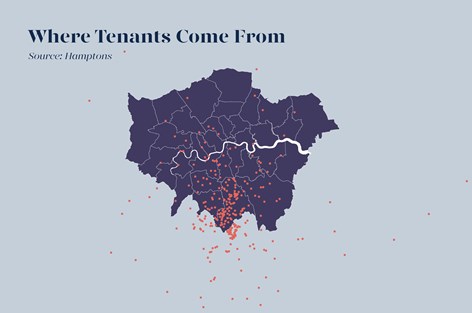 Caterham's rental market is more tightly tied to London than it is to the rest of the Home Counties. Around two-thirds of tenants moving to CR3 last year came from the Capital, a figure which has steadily crept up over the last decade. Most tenants move from the three South London boroughs of Croydon, Sutton and Bromley, although more tenants move from Croydon than the rest of London combined. The town's draw also attracts tenants from other M25 junction towns including Sevenoaks, Reigate and Leatherhead. 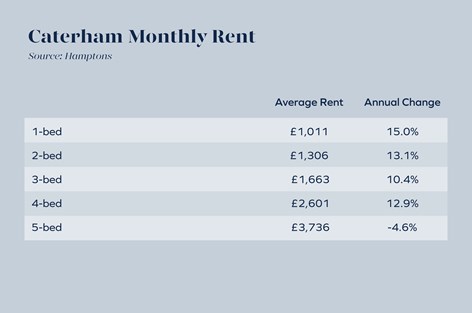 Low stock levels have meant that rents in Caterham rose 13.5% over the last year, increasing in line with rapid rental growth across the South East. This growth has steadily eroded the discount Londoners used to enjoy when leaving the Capital, with rents in CR3 now on par with much of South London. With rental growth outpacing prices, yields locally have risen, surpassing the average for the South East for the first time this year. 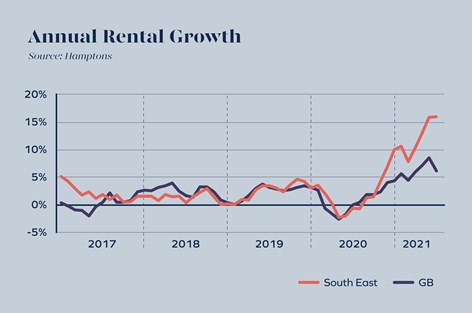 Rents in the South East are rising faster than in any other region of the country. While they dipped briefly as the market reopened in Summer 2020, they now stand 16% up on the same time last year. In part, this has been driven by a lack of rental stock, with 52% fewer homes available to let in the South East than the same time two years ago, one of the largest falls recorded anywhere in the country. 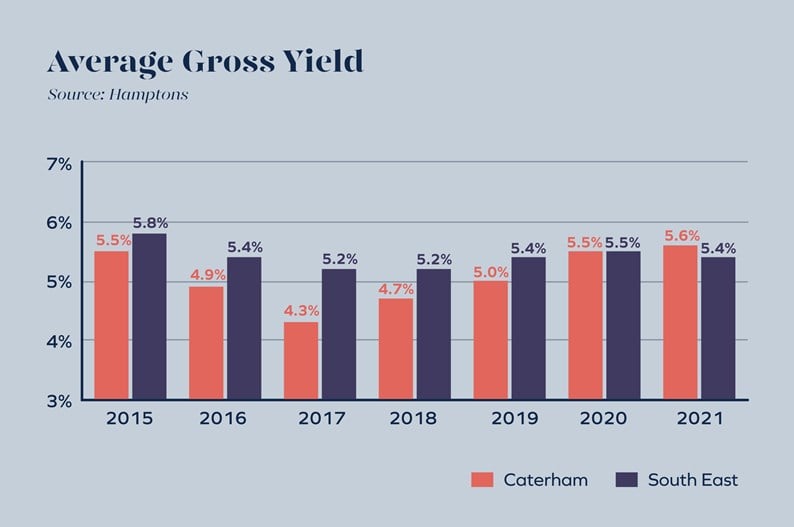 To find out more about the Caterham market