In his Summer Statement today (8 July) the Chancellor, Rishi Sunak, outlined a range of measures designed to retain jobs, create employment and kickstart the economy.  This was a plan for jobs, designed to help ease the ‘profound economic challenges’ brought about by the impact of the coronavirus pandemic.

In his speech he acknowledged the role of the housing market in supporting the wider economy and announced – with immediate effect – a raising of the stamp duty threshold from £125k to £500k on primary residences in England.  This will run until 31 March 2021 and will mean that anyone buying a home up to £500,000 will pay no stamp duty. 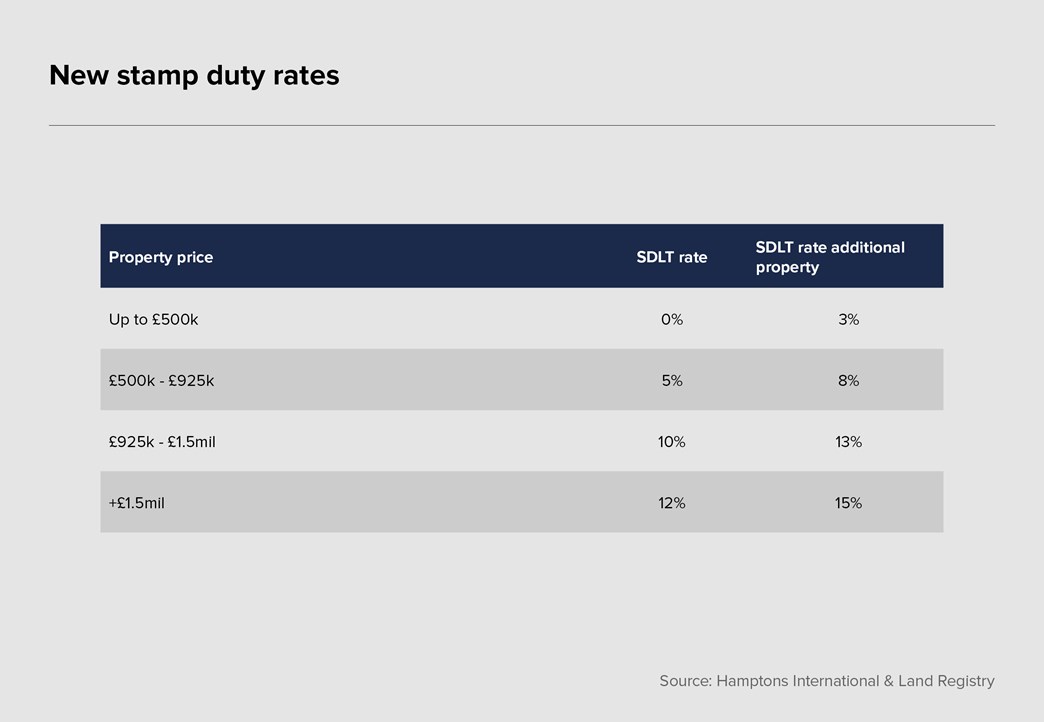 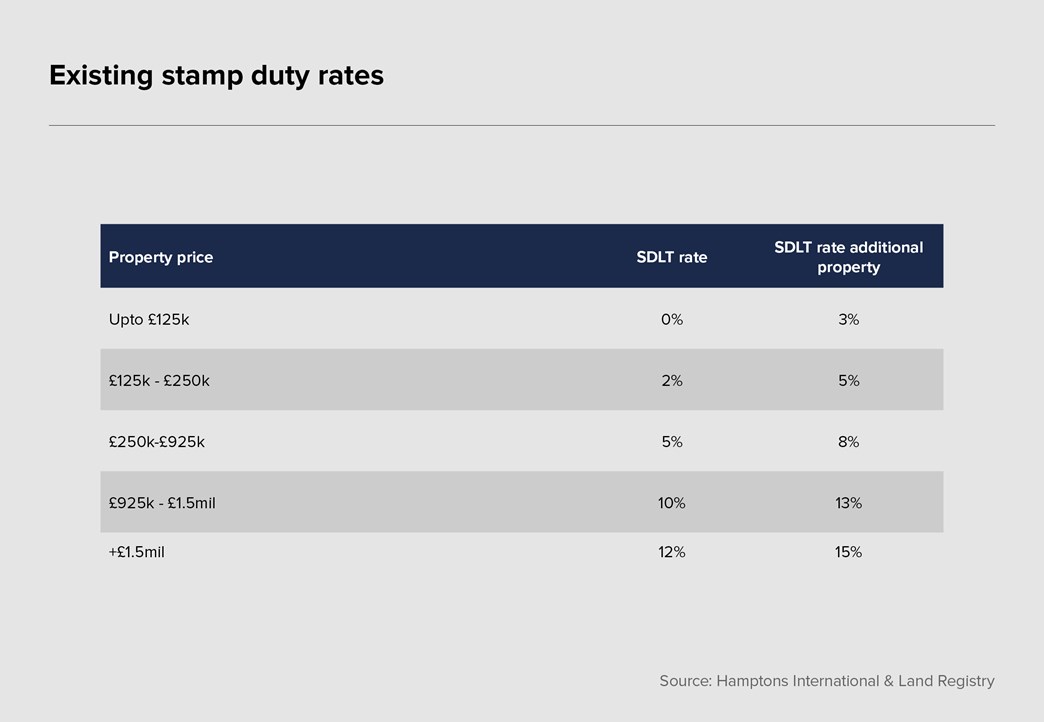 The changes will help eliminate the burden of stamp duty for half a million additional households and reduce the cost for the remaining 12% of the market who purchase homes above £500k.  Overall, it will mean a saving of £15k for buyers paying £500k or more for a home.

The changes announced today are progressive and will take most buyers out of the stamp duty system altogether.  However those purchasing the most expensive homes won’t benefit quite as much in percentage terms.  The buyer of a £800k home will see their stamp duty bill cut in half (from £30k to £15k), while a buyer paying £5m will see a reduction of less than 3%, albeit still £15k. 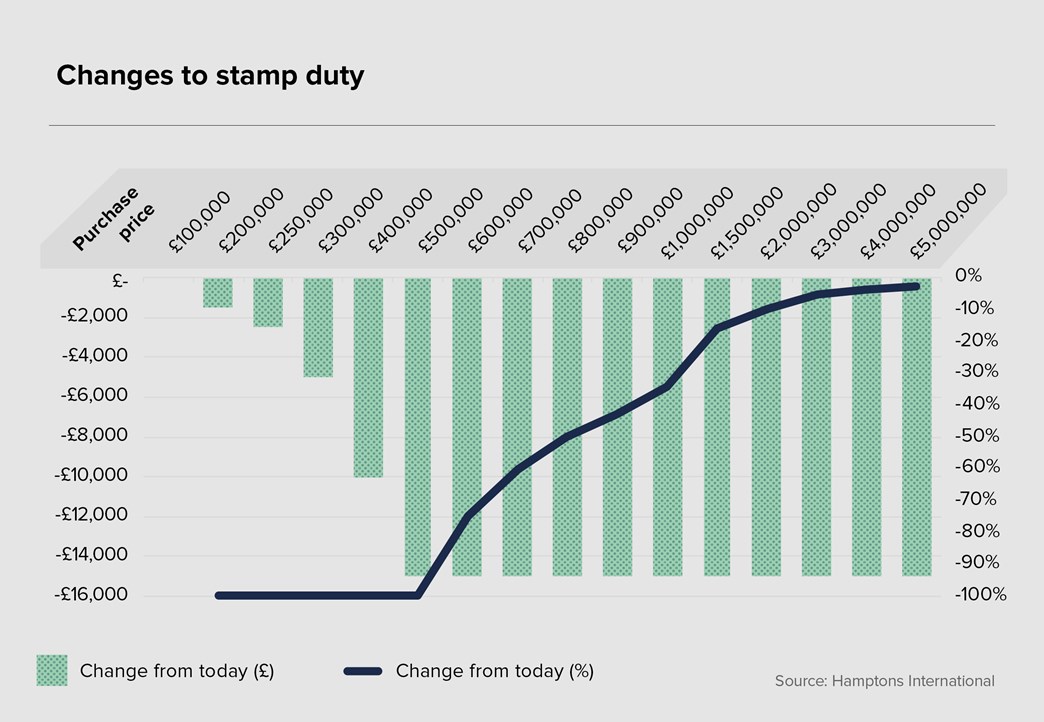 Given first-time buyers pay no stamp duty when purchasing properties under £300k and reduced stamp duty on homes under £500k, the impact of the fiscal changes will be smaller for this buyer group.  Just 5% of those purchasing their first home pay more than £500k.

However in London and the South East, where 13% and 9% respectively of first-time buyers spend over £500k on their first home, the reduction in stamp duty will represent a considerable saving. It’s worth noting that stamp duty remains a barrier for all new purchasers and any reduction is welcome.

Today’s stamp duty changes will be welcome news for investors too.  While the 3% surcharge remains in place, the increase in the threshold means that the average stamp duty bill for an investor will fall by £1,840, or 22% in England.

While only 3% of investors purchase properties over £500k, investors in London and the South East stand to gain the most from the changes.  One in five landlords purchasing a buy-to-let in London spend more than £500k.  As a result, the average stamp duty bill for an investor will fall by £7,240, or 26%.  Whereas a landlord buying in the North East will see their average stamp duty bill fall to just £280.  And it’s not just landlords who will benefit, those looking to flip properties will make savings too. 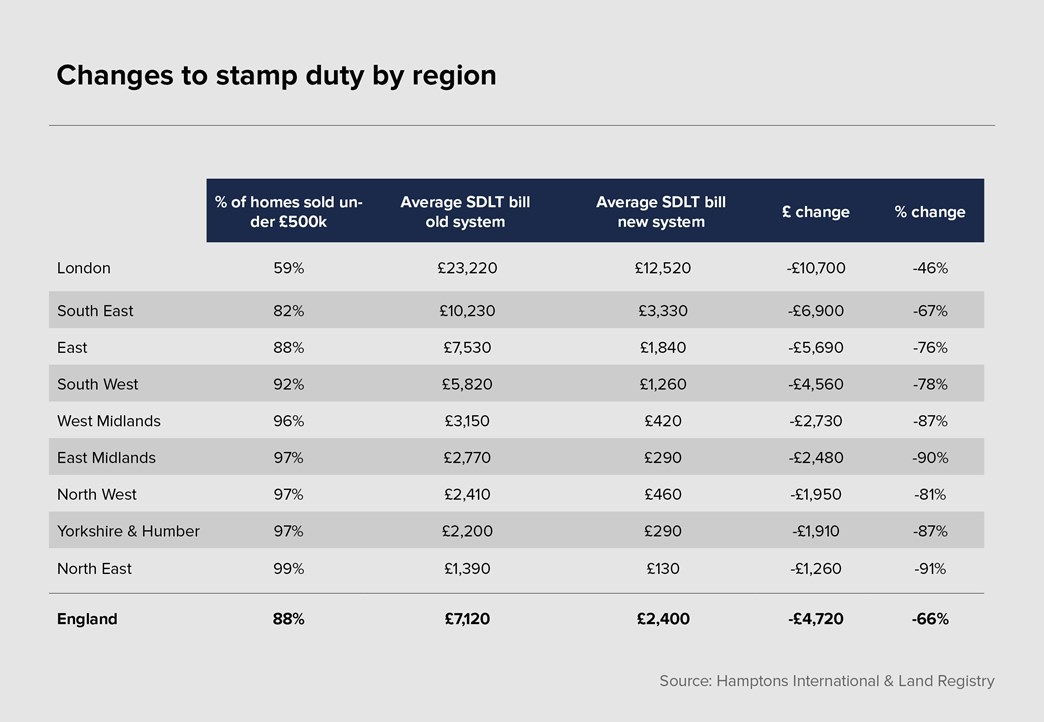 So what does this mean for the housing market?

The changes will certainly help support the housing market over the year ahead by reducing the cost of moving, a big barrier for many.  As well as making moves more affordable for those unable to pay the stamp duty bill or for those who have found it prohibitively high, the scheme is also likely to bring forward moves which were due to take place anyway in 2021 and 2022.

While the stamp duty giveaway has improved our expectations for the housing market over the year ahead, it’s no magic fix for the long-term.  The package of measures announced today should go some way to soften the blow that we were expecting towards the end of the year as the furlough scheme unwinds, but it’s still difficult to predict the real economic damage caused by the virus.

The longer-term path for the housing market will be dictated by the speed and magnitude of the economic recovery, which will set the tone for mortgage availability and consumer confidence too.  Activity in the housing market next year will also partly depend on whether the Chancellor sticks to his intended deadline of the 31 March 2021 for the scheme to unwind – however a change this big might prove a little harder for the Chancellor to reverse than perhaps he is anticipating.