Shared ownership on the up

As housing associations up their development pipeline across the capital, London saw more shared ownership schemes launched last year than in any previous year. Increasingly they are in Outer London where values are lower and affordability constraints are less tight. With a £90,000 household income cap, and in many cases local authorities imposing lower limits through S106 agreements, shared ownership increasingly only works in Outer Boroughs.

Zones 3, 4 and 5 all saw record numbers of schemes launched last year. In the outer Zones around 1 in 14 new homes coming onto the market is now available to buy on a shared ownership basis. While many of these schemes form part of the affordable housing contribution from private developers, increasingly they are standalone schemes. So far this year, 40% of shared ownership developments launched have not been part of a private scheme, up from 25% in 2015. 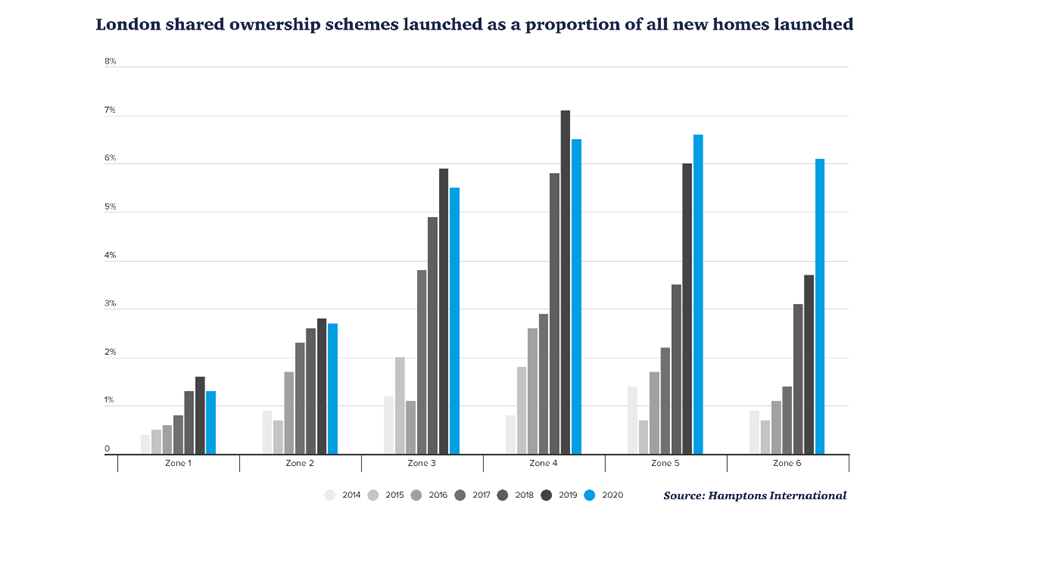 This rise has in part been driven by increasingly ambitious housing association development pipelines which have seen shared ownership homes developed in their own right outside of S106 agreements. But this rise however has also been supported by schemes changing tenure. A number of what had been private schemes are being delivered on a shared ownership basis to de-risk the development by reducing the number of private sales required and attracting affordable housing subsidy from the government.

Shared ownership is on the cusp of becoming a mainstream tenure in Outer London. And on paper, the government proposals to reduce the initial share people can buy in their home from 25% to 10%, will increase the numbers who can afford a shared ownership home. The drop in the minimum equity levels is likely to cut the household income required to buy a starter flat in Outer London from the mid-£30,000s to the mid-£20,000, which will open the scheme up to thousands of new would be purchasers. The big challenge however will be for housing associations to make the new lower equity levels viable, which is the only way these new homes will get built.