A month ago (8 July) Chancellor Rishi Sunak announced a stamp duty holiday which saw the tax threshold on a property purchase in England and Northern Ireland rise from £125,000 to £500,000. The change, which took immediate effect and will last until 31 March 2021, will save buyers up to £15,000 on their purchase.

It seems as though the move has acted as a boost to the market.  Buyer registrations (or applicants) between 8 July and 8 August were up 38% on the same period last year with demand especially high for properties in the £500,000 - £750,000 price bracket – up 92% year-on-year.

Buyer interest was greatest in Scotland (up 77% year-on-year) across all price bands, followed by the East of England (53%) and the South East (52%).

The move from the city to the country – a trend that began prior to the stamp duty holiday – has continued.  Applicants registering to buy in country locations have risen the most at 49% compared with the same period last year.  While demand in city locations has risen the least, albeit still up 20% year-on-year.

Of all buyer types, first-time purchasers saw the biggest increase in numbers. In London there were 55% more first-time buyer registrations compared to the same period a year ago and across the UK numbers were up 45%. Meanwhile investors have risen by 28% and second-home buyers by 22%. 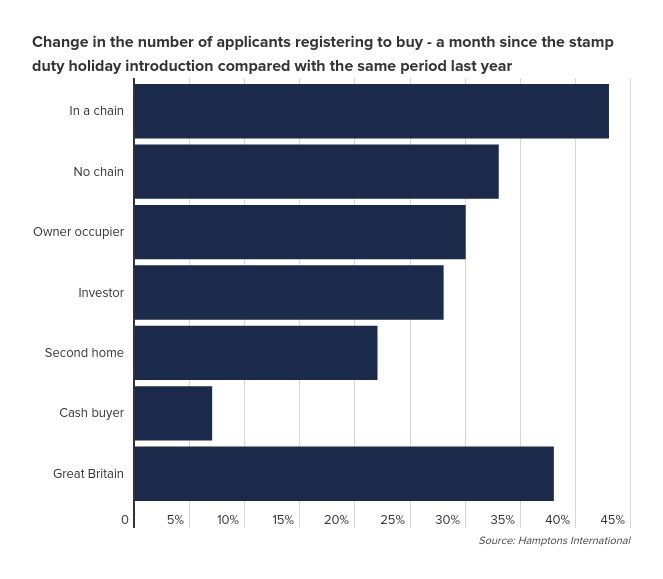 This has led to multiple bids on properties.  In fact nearly a third (30%) of homes sold since the stamp duty holiday had offers of three or more buyers. This is up from one in four (25%) over the same period last year.

Homes priced below £250k or at £1m or over received offers from three or more buyers in the month following the announcement. But for properties selling between £750k - £1m there was a 13% year-on-year rise in multiple (3 or more) offers being made on homes.

Homes in Yorkshire & Humber were most likely to receive offers from multiple buyers. Across the region 39% of homes sold following offers from three buyers or more.  But the biggest year-on-year increase in offers made were in the North East (+18%), Scotland (+11%) and the North West (+9%). 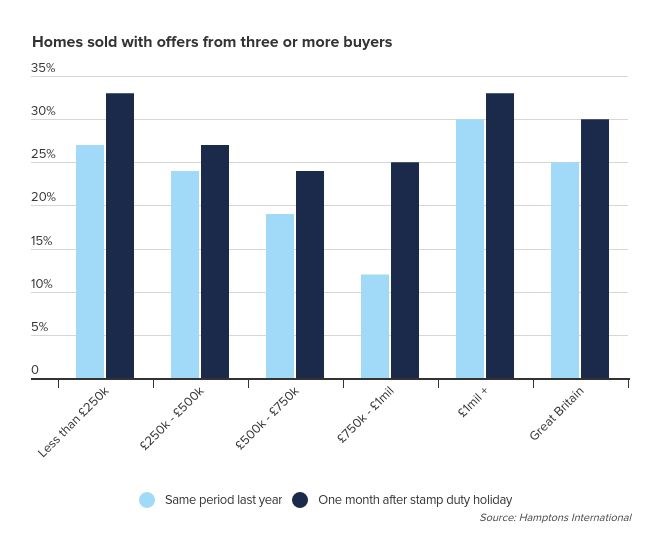 It comes as no surprise to learn that this in turn this has led to homes achieving close to, or surpassing, their asking price.  The so-called asking to achieved price (the price at which a house originally came onto the market, compared to the price at which it went under offer) has reached a record high.

Again it was properties that sold for more than £750k – where buyers are able to max out on the £15k saving - that saw the biggest improvement in asking to achieved.  While the average home selling for £1m or more achieved 97.7% of its initial asking price, up from 96.4% during the same period last year.

Northern regions recorded the biggest improvements.  In fact, the average home in Yorkshire & Humber achieved 102.4% of its initial asking price in the month since the stamp duty holiday - the only region where homes were more likely to sell above their asking price - and up from 99.6% in the same period last year. 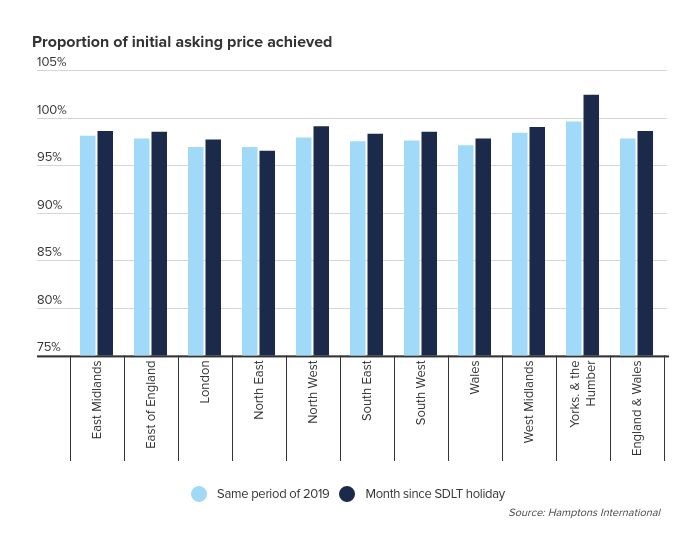 “The introduction of the stamp duty holiday has given a further boost to the housing market which was already showing strong signs of recovery even before its introduction.  The number of people looking to buy a home has risen across every region in Great Britain since the announcement, with Southern areas recording the biggest increase.  It’s in these regions, where house prices tend to be higher, that buyers stand to gain the most from the holiday.

“While it’s still early days, the data suggests that house prices seem to be stable, with homes under offer achieving a record share of their initial asking price.  But perhaps contrary to expectations, it’s Northern markets which have performed most strongly.  Price growth across the North has lagged significantly behind that of the South over the last decade, and with more capacity for prices to rise, perhaps this year will mark a turning point.  It also demonstrates that there are longer-term factors influencing the market too.

“While the stamp duty holiday has boosted the market, the impact of two months lockdown shouldn’t be ignored either.  Having spent more time in our homes, many households have decided to bring forward moves.  With space topping buyers wish lists, demand for homes in the suburbs and country locations has increased the most, and it’s these homes that are most likely to sell above their asking price.  Over the last decade house prices in cities have risen more than twice as much as those in the country, so this trend may mean the gap between city and country house prices will begin to close.”