Despite the gradual easing of lockdown, the London vs rest of the country rental growth divide remains entrenched.  Outside the capital would-be tenants are scrabbling over stock before it hits the portals, while in Central London landlords are chasing tenants just as relentlessly.

Our latest lettings index shows that in March, the average rent on a newly let home stood 4.4% higher across Great Britain than at the same time last year.  Regions outside London continued to see the highest rates of rental growth with rents increasing by 6.8% annually, the third consecutive month that annual rental growth outside the capital exceeded 5.0%. And apart from London, last month every English region recorded rental growth of at least 4.0%.

Rental growth in London continues to follow a different path, with rents falling 2.1%.  This marked the second month in a row that rents have fallen after turning positive between October 2020 and January 2021.  Once again, the fall has been led by Inner London where rents dropped 17.1%, the 13th consecutive month that rents have decreased.  While in Outer London, rents were 2.6% higher than at the same time last year, with tenants in Zones 3-6 viewing 48% more homes than in March 2020.

There are however signs of a return to Zone 1, with viewings up 64% year-on-year in March.  But record-high stock levels mean rents are unlikely to start recovering to pre-pandemic levels until later in the year. 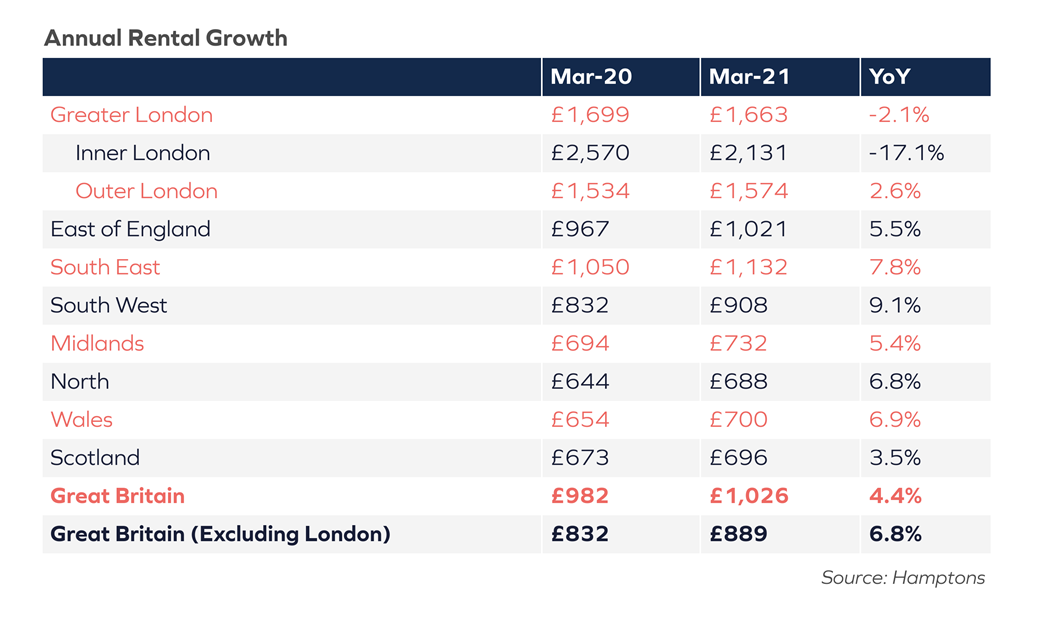