As the nights draw in and the leaves begin to drop, the number of homes on the market for sale has fallen to a record low.

For the first time in over a decade, the number of homes for sale across the UK at any one time has dipped below 500,000 mark to just 450,000. This number is down 28% on the same time last year and by more than a third from two years ago. During more normal times between 600,000 and 700,000 people typically have their home up for sale at any one point.

While the drop-off in stock has been felt particularly acutely recently, the number of homes for sale has been declining for the last five years after peaking in 2016 at just under 700,000. This fall has been driven by a combination of shorter-term post-pandemic market conditions alongside longer-term structural changes to the housing market.

It has been a shortening of the time taken to sell a home which has been the primary driver of stock levels declining to record lows recently. With each home on the market for a shorter length of time, it means collectively there are fewer homes for sale at any one point. Each week the average time to sell a home is reduced by, equates to a 15% reduction in stock levels even if an identical number of homes come onto the market.

Lower stock levels have also to a degree become self-fulfilling. Often it takes a homeowner to see the house they want to buy before deciding to put their own on the market. But some sellers have struggled to find their next home, or at least one which ticks most of the boxes which were their reason for moving in the first place. As a result, many have chosen to sit tight. While others have got themselves under offer before withdrawing from the market, leaving a chain-free or first-time buyer disappointed.

Longer-term it has been a recovery in first-time buyer numbers from 2012 onwards that has also put concerted downward pressure on stock. While their numbers dropped back slightly over the course of the pandemic, they remain at historically high levels. These are buyers without a home to sell meaning that each purchase reduces the number of homes on the market. Until the current generation of first-time buyers decides to upsize in meaningful numbers, they are likely to weigh down on stock levels.

Also pushing down on stock levels has been the long-term decline in cash buyers. The vast majority of cash purchases are made by older households, typically those downsizers trading in a larger family home often for a smaller newly built one. This has meant larger family homes have been freed up more slowly over the last decade, homes which have been most in demand over the last 18 months. A recovery in downsizers would serve to boost stock levels.

It may be that stock levels have finally bottomed out on the back of the average time to sell a home creeping up slightly between September and October. But looking forward it remains difficult to see where a significant increase in the number of homes for sale will come from. The current strength of the market makes it difficult for stock levels to rise as they typically do as we near the end of the year. While stock levels are predominantly replenished during the first few weeks of the new year, it will be on the back of an inventory that is already hugely depleted. 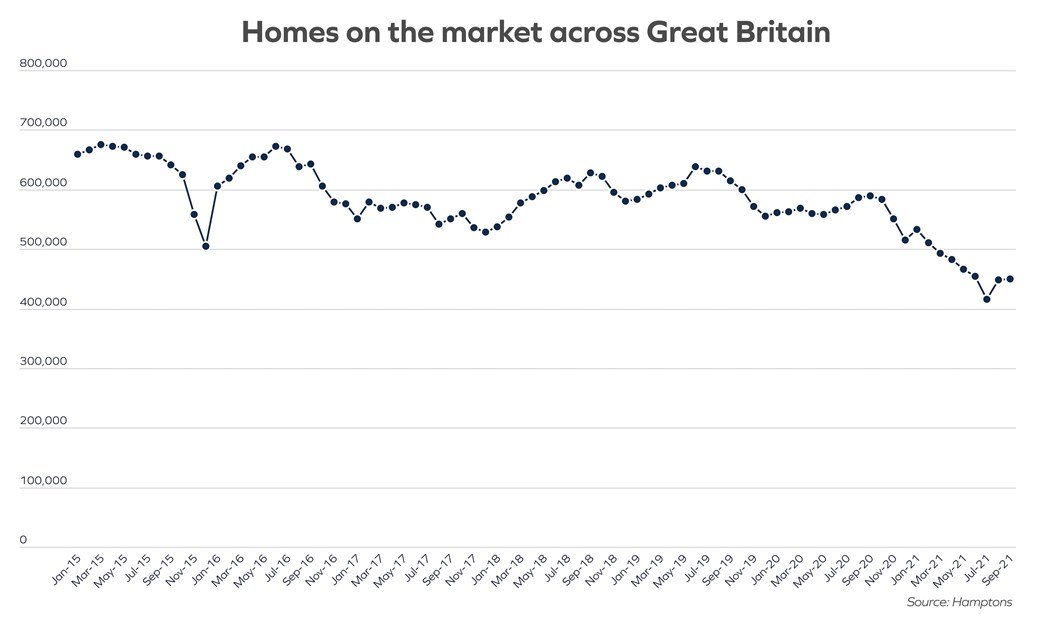