Inner London bore the brunt of the pandemic’s impact on the rental market which saw a decade of rental growth wiped out.  In previous downturns, Inner London has typically been the region to lead the rest of the country.  But this time around it was the only area where rents fell for 13 consecutive months, while rents in other regions reached record highs.  However, it appears that late spring marked the bottom of the Inner London market.

For the first time since April 2020, the average rent in Inner London rose on a monthly basis, averaging £2,103 pcm in June 2021.  While the average rental home in Inner London costs 16.5% or £415 pcm less than it did this time last year, rents jumped 4.3% month-on-month between May and June, the largest monthly increase on record.  June was also the third straight month that the annual decline in rents slowed.

The reversal in the direction of rental growth has been driven by more tenants returning to the capital.  Last month, the number of tenants registering to rent in Inner London was up 16% on June 2020 levels and up 45% on June 2019.  Zone 2 recorded the strongest growth in demand, but this has been almost completely driven by domestic, rather than international tenants.  Here, the share of tenants coming from outside the capital doubled as more people planned their return to London. 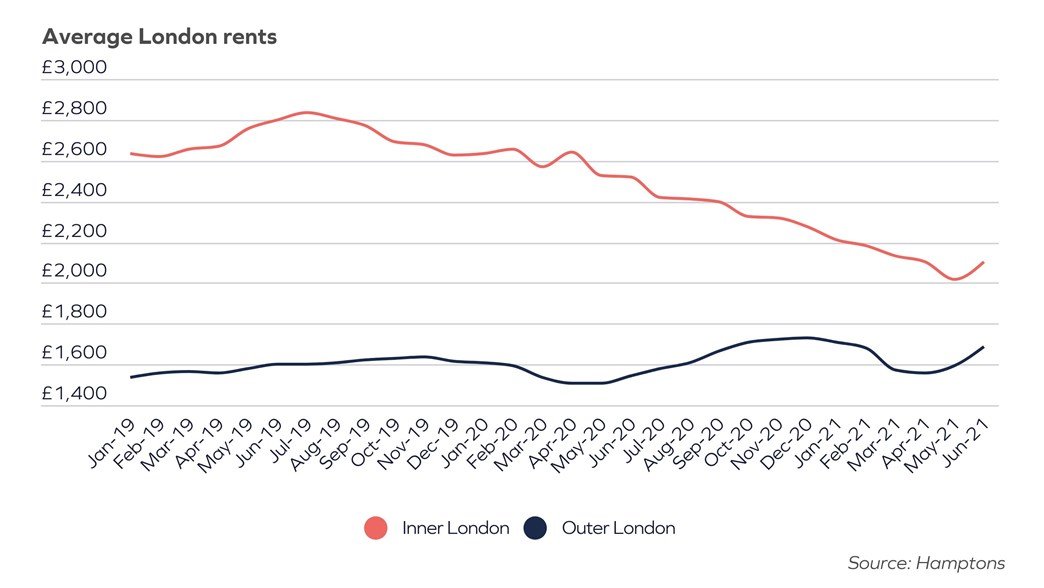 Rising rents have also been supported by lower stock levels, a reversal of the months following the height of the pandemic when landlords struggled to find long-term tenants for their short-term lets.  While back in September 2020 there were 14% more homes available to rent in Inner London than in September 2019, by June there were 8% fewer homes to rent than two years ago.  Family houses are most scarce, while entry-level flats make up most of the homes taking more than a week to let.

In contrast to Inner London, Outer London rents recorded only six months of falls on an annual basis following the onset of the pandemic.  Outer London rents have grown for the last 10 months, with June’s annual rental growth (9.4%) the strongest on record.  The average rental home in Outer London now stands at £1,685 pcm,10% more than it did when the pandemic started in March 2020.

We are forecasting that rents in Inner London will return to pre-pandemic levels within 12 months.  That said, and despite a recovery, rents in Inner London are likely to remain lower than they would have been had the pandemic not happened.  A relatively buoyant recovery has ensued as restrictions have been lifted, but some scarring is likely to remain as tenants become less closely bound to their office desk and international travellers remain in short supply.

Across Great Britain the pace of rental growth continued to climb in June, with rents rising 8.5% year-on-year. Nationally, the last 12 months have seen five years of pre-pandemic growth squeezed into a year.  Rents are rising at such a pace that monthly rental growth figures could, in more normal times, be mistaken for annual ones.

Stock scarcity has become a pressing issue, with 46% fewer homes on the market than at the same time two years ago.  In rural and suburban areas, the drop in rental homes on the market has been even greater. But while rental growth is currently underpinned by a lack of stock, it will ultimately be tapered by affordability.

Outside London, rents rose 10.9% annually - the fastest rate of growth recorded during any time since 2014.  Last month eight of the 11 GB regions recorded the biggest annual increases since the lettings index began in 2014.  Wales, the West Midlands and London were the only regions not to register record rental growth. 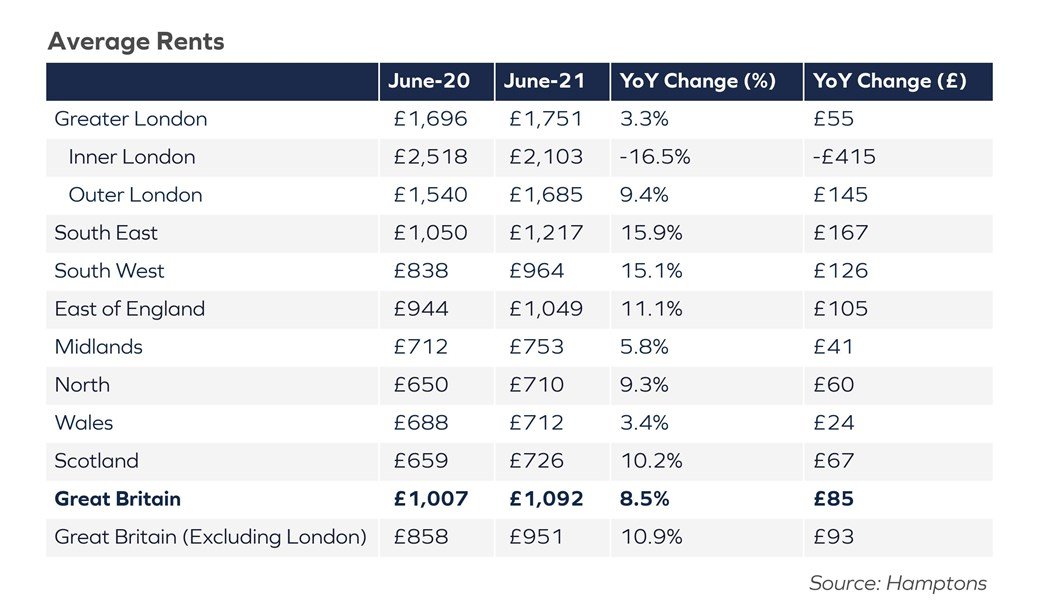 Speak to our Lettings Experts

Have you got a property to let, looking for somewhere to rent or just want advice on the rentals market? Register with us today to speak to one of our Lettings Experts.