We forecast that house price growth will slow in 2021, before picking up again in 2022 and 2023 as incomes begin to improve and the economy recovers, returning the housing market to its longer-term growth cycle.

The UK may have fallen into the deepest recession on record. But we do not expect house prices to fall this year, forecasting instead a rise of 2.0% in Great Britain.

What lies behind our forecast? Price growth in the months before the Covid-19 crisis was lower than normal, making a sharp correction less likely. The housing market has also recovered from lockdown more quickly than expected, partly due to movers putting more importance on their home and also due to the fact higher-income workers, many of whom are homeowners, are less likely to have lost their job.

The introduction of a stamp duty holiday provided a further boost. And there aren’t any signs of households taking on more risk with their move, with many having already built up equity in their current home.

Sellers achieved a record share of their asking price in September, and these late summer sales will form completions in Q4. As a result, we forecast that house prices will rise slightly, or remain flat across every region in Q4 2020 compared with the same period last year.

However, we do not underestimate the level of uncertainty that lies ahead. The second quarter of 2021 will be a period of challenge given that the withdrawal of government support will bring job losses.

Our forecasts are based on the assumption that a Brexit trade deal is agreed with the EU and a vaccine becomes available in H1 2021, with no major second lockdown. We also assume the stamp duty holiday will not be extended or modified, which will cause the housing market to slow following its removal.

The hit to the labour market combined with the end of the stamp duty holiday means we expect a small downward adjustment to house prices during Q2 2021, particularly in regions with the highest proportion of furloughed employees, the group most likely to lose their jobs.

A pick-up in economic recovery should settle the housing market in the second half of the year, with the mortgage market returning close to pre-covid times. Overall we expect prices in Great Britain to remain flat in 2021, with small price falls in regions that have the weakest labour markets and where affordability is most stretched.

Affordability will remain a barrier in some regions. But a combination of stronger wage growth and weak inflation will create capacity for house prices to rise 2.5% in 2022 and 3.5% in 2023 nationwide. Price growth will equate to 8.0% over the next four years nationally. 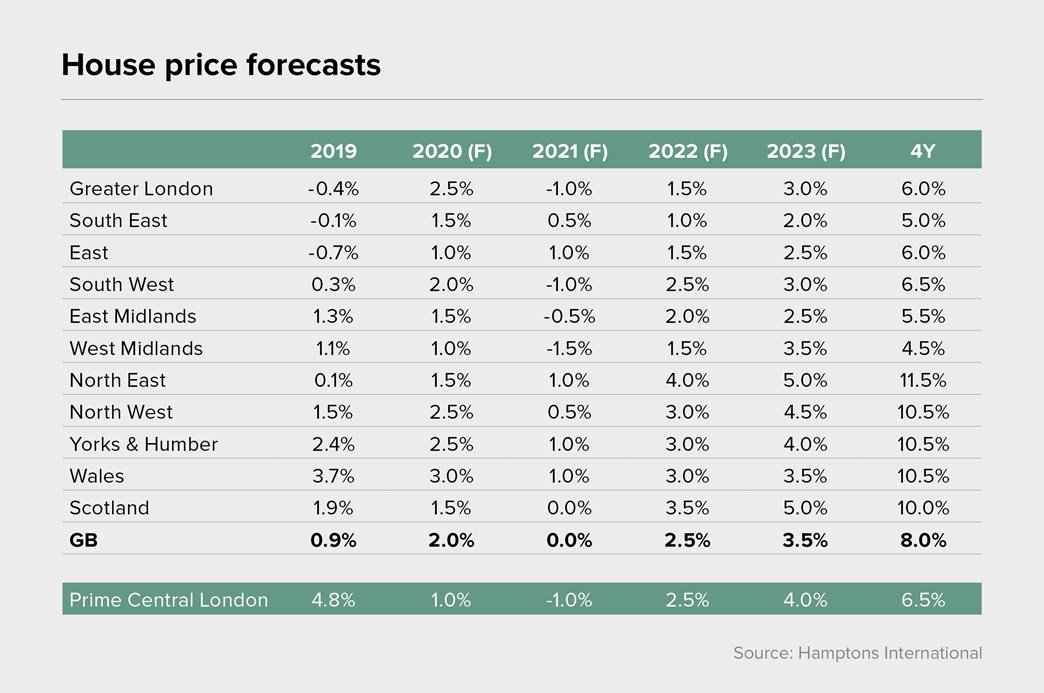 London
Following seven consecutive quarters of decline, house prices started to rise in London in Q1 2020. Yet the average house price in the capital is still below its level in 2017.

London’s market rebounded quickly after the easing of lockdown, buoyed by pent-up demand over the last few years and an increase in the number of people bringing forward a decision to move. This is also the region where buyers enjoy the greatest benefit from the stamp duty holiday. As a result, we think house prices in London will rise 2.5% in 2020, offsetting the decline of -0.4% in 2019.

However, the number of homes coming onto the market for sale in the capital is climbing. In August there were 78% more new instructions than at the same time last year. The region also has the highest furlough-take up rate in the country. We forecast that this may contribute to a 1.0% house price fall in 2021, when combined with existing affordability barriers, lack of international buyers, the end of the stamp duty holiday and an increase in the number of households seeking to relocate elsewhere.

As the economy recovers, we expect London’s market to return to its longer-term cycle. Since prices have risen by 53% in the city over the last 10 years compared with an average of 10% in the North, we expect London to underperform Northern regions. House prices in London will rise 1.5% in 2022 and 3.0% in 2023, putting four-year growth at 5.5%.

Prime Central London
Despite the uplift in activity early in the year, London’s prime central market has taken much longer to recover from lockdown, thanks to a lack of international buyers and a leap in the number of households leaving the city centre for more space, particularly outdoor space.

The number of homes for sale was up by 51% year-on-year in August, putting pressure on pricing. As a result, we expect prime central prices to fare less well than the rest of London over the next two years. However in the longer-term, this part of the market should recover quite quickly.

Prime London property is seen as a safe haven and relatively good value on a global scale, given the weakness of sterling. London remains one of the most sought-after cities to live in the world and its status would be further boosted by an EU trade deal. We expect prices to rise by 6.5% over the next four years, outpacing Greater London. 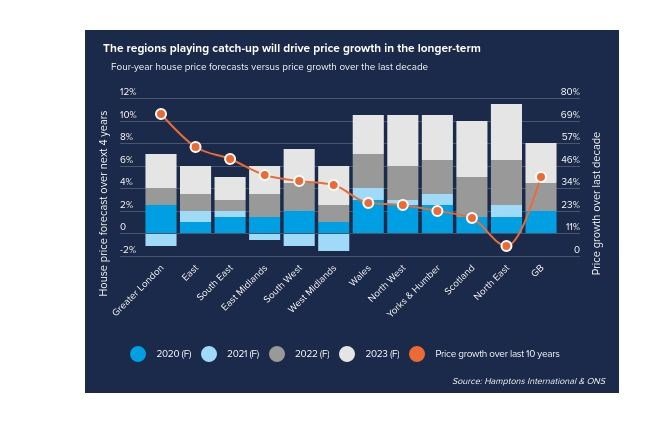 South
Affordability pressures caused price falls in the South East and East of England in 2019. Both regions have a low take-up of the furlough scheme, which suggests their labour markets may be more resilient to the economic damage.

While the South East is set to be the most popular destination for households leaving London, future price growth will be capped by affordability barriers. We expect house prices in the South East to rise in each of the next four years, giving total growth of 5.0%.

The East is more affordable than the South East and was seeing weaker price growth leading into the crisis. We expect prices to rise 6.0% over the next four years.

The South West may be the most affordable Southern region, but it has seen the biggest rise in the unemployment rate of any region in Great Britain due to its reliance on tourism. We expect a price fall of 1.0% in 2021, but by 2023, the South West should have caught up with the South East and the East.

Midlands
The Midlands seems set to be hit hardest by the economic impact of the pandemic. Both regions are heavily reliant on manufacturing, one of the sectors most affected by Covid-19. The unemployment rate in the East Midlands rose to 4.4% in May to July 2020, the second-biggest quarterly increase in Great Britain.

House prices in the East and West Midlands grew quickly between 2017 and the start of 2020. But due to the pain inflicted by the pandemic on the labour market, we expect price growth to slow this year, with small price falls in 2021. Growth should return in 2022.
We expect the East and West Midlands to be the weakest performing regions in Great Britain over the next four years.

North
Over the next four years we expect house price growth to be strongest in all parts of the North. The top performer is forecast to be the North East, which ranks as the most affordable region and where prices have only risen 5% over the past decade. The North East also has the highest number of applicants registering for each new property, a sign of pent-up demand. By the end of 2023 we expect the North East to be the top-performing region, with prices to have risen by 11.5%.

We also expect house prices in Yorkshire and The Humber to continue rising throughout the forecast period, reaching 4.0% annual growth in 2023.

Wales
House price growth has been strong in Wales over the last few years; there was a rise of 3.7% in 2019, the highest of any region in Great Britain. It also has a resilient labour market, with the lowest unemployment rate nationwide and a low furlough scheme take-up.

Scotland
Scotland’s market bounced back particularly strongly following its delayed reopening at the end of June. It’s also the second most affordable region: prices have risen 19% over the last decade. We expect house price growth to slow to 1.5% this year and remain flat in 2021. Over the next four years we expect prices in Scotland to rise by 10.0%.

Prime markets outside London
We expect prime markets outside the capital to outperform price central London. These areas are typically less reliant on overseas purchasers, buyers have generally built up considerable equity, are less likely to have lost jobs and an increase in moves out of London will support pricing. 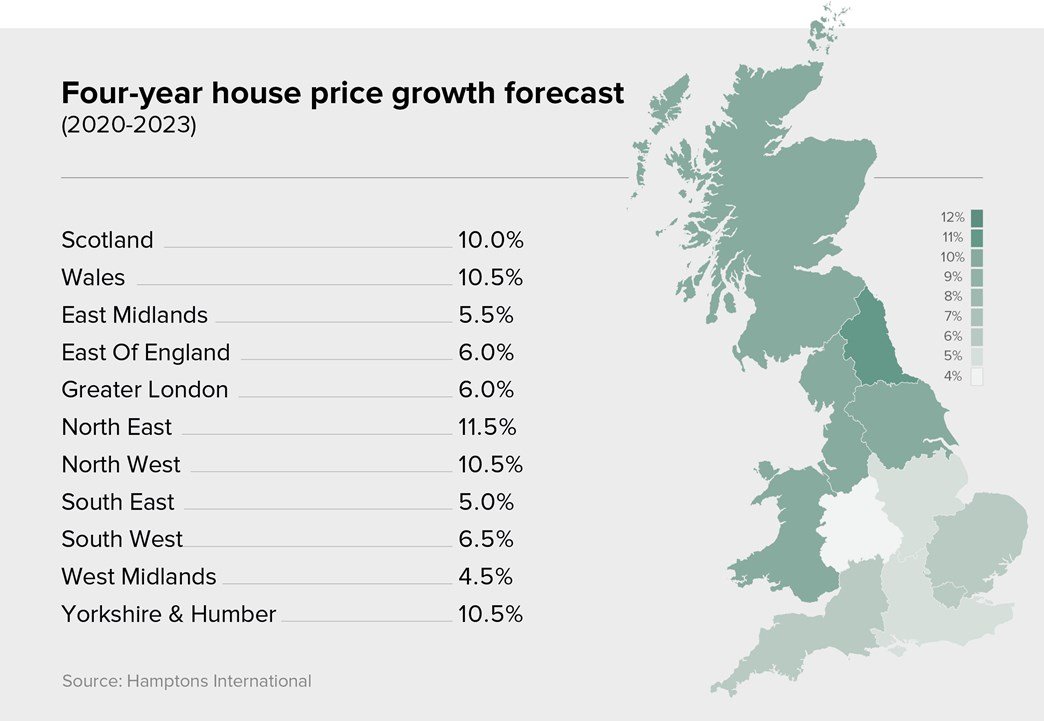