Fewer investors are coming up against first-time buyers

Despite investors enjoying stamp duty holiday savings, fewer of them than ever before are coming up against people buying their first home

One of the criticisms of the stamp duty holiday from some quarters was that all buyers, including investors, would enjoy a reduction in their stamp duty bills. While investors will still pay the additional 3% surcharge, the normal element has been reduced or removed in line with all other buyers.  In fact, the average investor will see their stamp duty bill fall by £1,840.

Over the last five years, the proportion of first-time buyers coming up against an investor has fallen significantly, predominantly due to fewer investors buying. In 2015, 30% of properties offered on by a first-time buyer also received an offer from an investor. This figure has fallen in each of the last five years, and so far in 2020, this figure stands at just 19%.

Despite the changes to stamp duty in July when the holiday started, just 17% of first-time buyers have come up against an investor, down from 20% beforehand.  This suggests first-time buyers aren’t being squeezed out (by investors at least).

While in most cases they are able to outbid the investor, it’s not always simply a question of money. Some vendors would rather sell to someone who is going to live in their home, even if it’s at a financial cost to themselves, over someone who is not. In 23% of cases when a seller accepted an offer from a first-time buyer over one from an investor, the first-time buyer offered either the same amount or less. 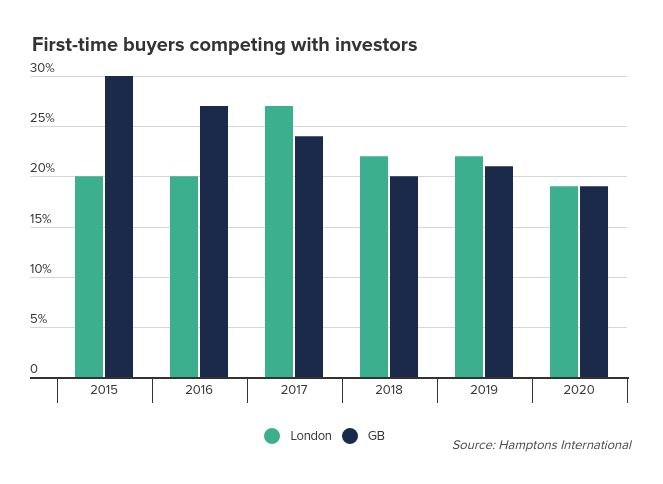