As the end of February approaches, we thought we had passed the point where most new buyers can conceivably complete before the end of the stamp duty holiday.  However, it now sounds as though the government will be extending the stamp duty holiday up until the 30th June 2021, offering new buyers and those subject to conveyancing and underwriting delays a little longer to take advantage of the savings.  We expect this to be confirmed at the budget on the 3rd March 2021.

While history has shown that the market slows towards the end of most stamp duty holidays, and immediately after them, the lockdown induced desire for space has meant demand from buyers has held firm.

It is however a lack of stock which remains a sticking point, with 23% fewer homes coming onto the market in February than the same time last year.  While the numbers of flats coming onto market fell 13% year-on-year, there were 26% fewer new house instructions. This drop off has in part been driven by some vendors sitting on their hands, waiting for a vaccine and/or lockdown restrictions to be lifted.

The stock shortage has been exacerbated by the profile of buyers. In February 37% of buyers registering to buy also had a home to sell, down from 43% in February last year. Meanwhile first-time buyers and renters have made up a larger share of people looking to buy. With fewer buyers that are also sellers, the result is fewer homes coming onto the market.

With less stock to choose from, new instructions are attracting more interest. Nationally time to sell (the number of days between when a property is first marketed and when it goes under offer) dropped between January and February, falling from 63 to 45 days on average. Although it takes around 5 days longer to sell than it did in February 2020. Every region outside of London recorded a fall, with time to sell halving in the North West, South West and Yorkshire & Humber. In London however, the time to sell increased from 62 to 82 days, with prime fringe markets in particular recording a sizeable increase. This means it’s now slower to sell a home in London than anywhere else in the country.

Unlike the first lockdown, it has been possible to buy and sell houses throughout both lockdown 2 in November and the current one which began in January. Despite this, some would-be buyers and sellers have chosen to sit tight and wait for restrictions to be relaxed. This means, in similar fashion to when the market reopened in May last year, we expect those who were otherwise looking to move over winter to come onto the market as restrictions are eased a little later this year. 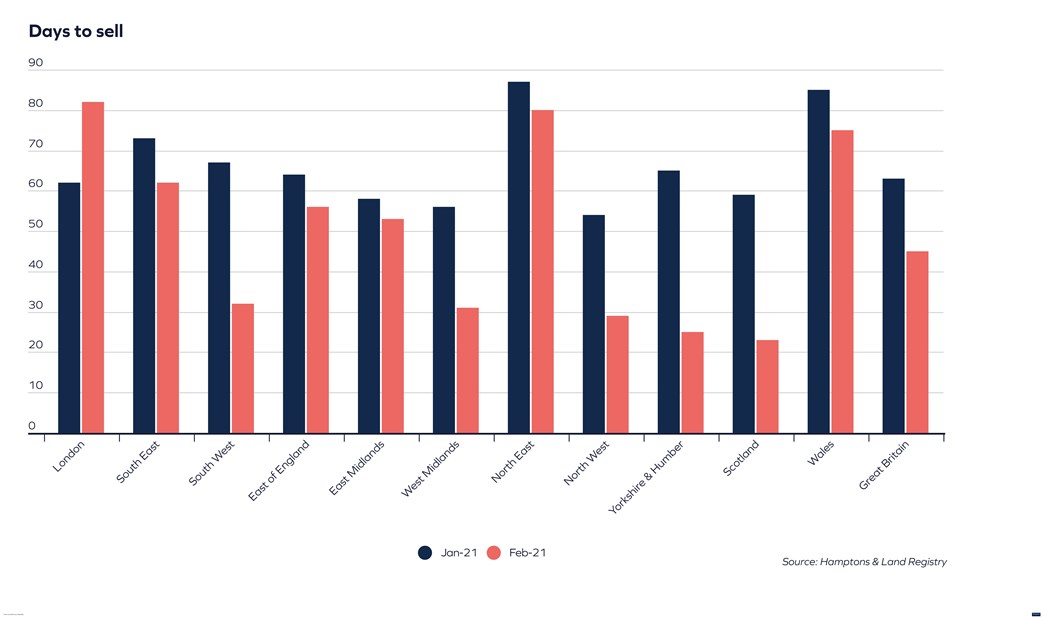