For those who missed the end of June stamp duty deadline, a mixture of strong price growth and a lack of alternative homes for sale has meant that the vast majority of buyers have been either reluctant or unable to renegotiate the purchase price with the seller.

The first phase of the stamp duty holiday ended on 30th June, with buyers in England who completed their purchase before that date paying zero stamp duty on the first £500,000 of the property’s price, thereby saving up to £15,000 in tax.

Our research reveals that only 13% of buyers who completed on a property in July 2021 had renegotiated their offer. This is the same proportion as those who managed to complete in the month prior to the end of the stamp duty holiday. There were therefore no signs of more buyers reducing their offers despite having to pay a bigger stamp duty bill.

Even though buyers now face a higher tax bill – the average stamp duty cost for a home mover in England has increased by £3,677 following the tapering of the holiday – the proportion of buyers who renegotiated their offer in June and July is below the 15% average seen over the last 12 months. However, the average saving following a renegotiation did rise slightly in July, from £14,700 to £16,900 – the latter is slightly more than the size of the maximum stamp duty saving.

Even buyers who missed the 30th June deadline are paying less tax, however. Home movers in England who can complete by 30th September pay zero stamp duty up to £250,000, which will save them up to £2,500 compared to completing after that date, when the stamp duty holiday is phased out completely and the tax-free threshold reverts to £125,000 (aside from for first-time buyers).

It is interesting to note that the behaviour of buyers today is in marked contrast to what happened after the last big change to stamp duty on 1st April 2016, when a 3% tax surcharge was introduced on the purchase of buy-to-lets and second homes.

In March 2016, 14% of buyers who completed that month renegotiated their original offer, saving an average of £10,240. By April, after the introduction of the 3% additional levy, the proportion of buyers who renegotiated almost doubled to 26%, with these purchasers saving an average of £14,630 by reducing their offer. Most of these purchasers were landlords or second home buyers, who tend to be more price-sensitive. By contrast, in June and July 2021, 86% of buyers were purchasing a primary residence.

This time around, a lack of stock available to buy has limited buyers options to renegotiate.  In July, there were 34% fewer homes available to buy than at the same time two years ago.  This has meant that the majority of buyers have had to absorb the additional tax bill at the risk of losing the home they wanted.  And with new instruction numbers waning, it also means we’re unlikely to see a rise in renegotiations post-September, when the stamp duty holiday draws to a complete close. 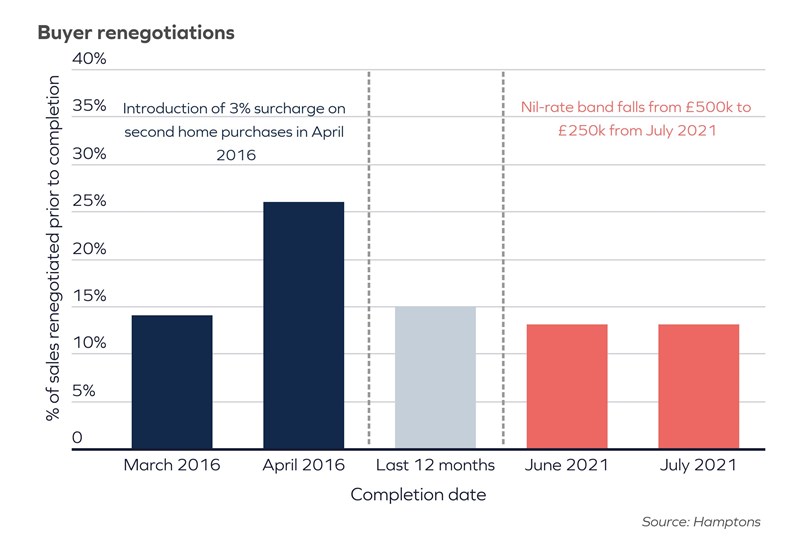